He stands at 6' tall, with a strong and athletic build. He has short blonde hair, and fire colored eyes. He's mostly covered in scales and has claws. He usually wears dark colored jeans and sleeveless shirts with boots. 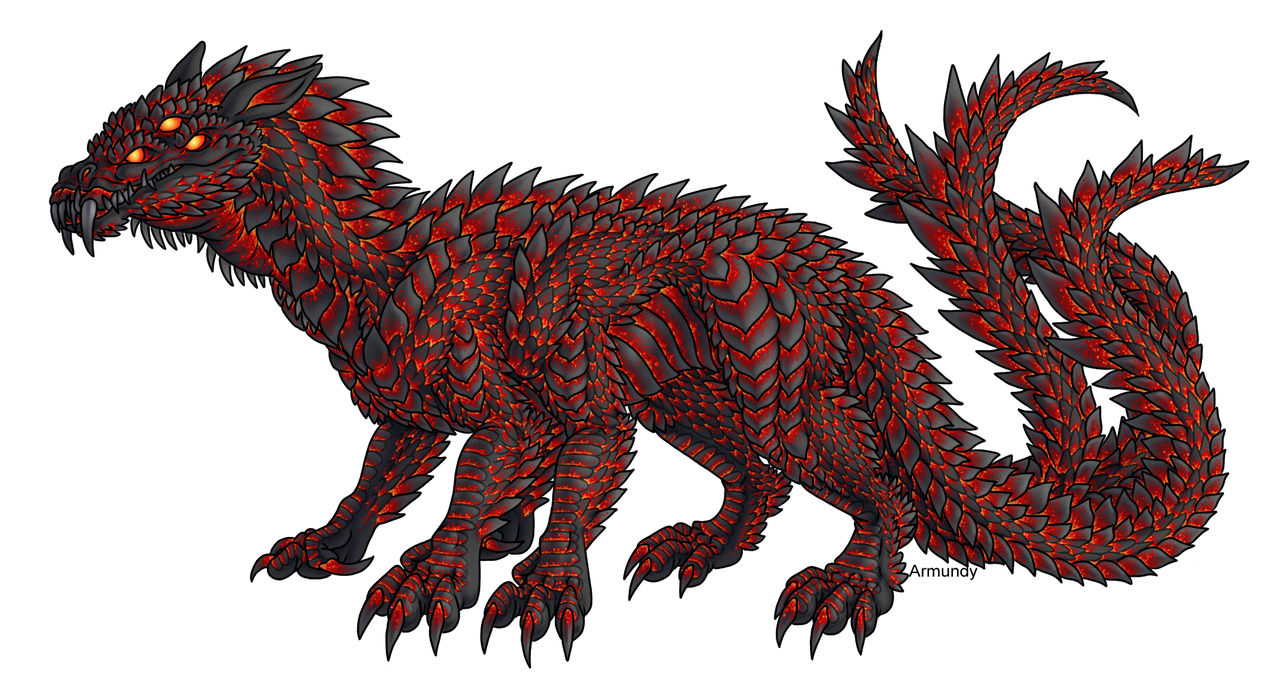 Size varies from 6' to 12' feet tall. Covered in black scales that have a fire like glow coming from between them. Has six legs, three tails, fangs and claws.
At his core Rowan is a kind hearted and humble boy, though he can be quite stubborn at times, humble and hardworking. The trauma he's experienced has become distant and very vague, fractured memories. He doesn't remove much of his past anymore and isn't completely sure how to feel about that. He still feels as lost as he did before, but he strangely feels a bit more free. He still has the occasional nightmare, or even a flashback, but the eldritch parasite weakening has given him more ease of mind.
Active
•Fire Creation: He create and control fire. This allows him to release it in blasts as well as fireballs which he can thrown up to thirty feet, with him being able to make the fire hot enough to burn through flesh. He's also able to morph the fire into solid handheld objects like tools and weapons such and screwdrivers and swords with these items being as strong as the finest steel, these items vanish when dropped, with them being able to cut and burn through flesh as well as cut into steel a little deeper than a normal weapon.
•Temperature Manipulation: He can raise the temperature by merely focusing. With him doubling the temperature every ten minutes he focuses. Once he's no longer focusing it will lower at the same rate. The temperature manipulation can reach up to ten feet.
•Eldritch Form: He's able to shift into a reptilian eldritch form. While in this form he's strong enough to lift six thousand pounds. He has six legs, all of which has claws, as well as three tails. He has six eyes that have night vision with his sense of smell and hearing being as good as a wolf's. He can shift his size, going from 6 feet tall to the full 12 foot size. The scales of this form can take medium caliber bullets.
•Visions: He's able to induce visions of the future. These visions show the future, but are always vague and hard to understand. These visions leave him drained, as if he hadn't slept or eaten in days.

Passive
•Eldritch Enhancements: While in his humanoid form he's mostly covered by scales. Said scales are decently durable, with it similar to strength as finely made chainmail. He's also able to lift two thousand pounds, and has claws in both hands. He also cannot permanently die, if killed his body will burn to ash and he'll reform from flames a week later, with his aging process stopping sometime in his twenties. He is completely fire proof.
•Enhanced Mind: He's able to perfectly understand eldritch based languages whether they be spoken or written, as well as speak them. He can also read any magical texts perfectly and without getting any of the potentially negative affects such as curses. He's also able to detect the presence of eldritch when within ten feet.
•What/Who Am I?: He is completely shielded from abilities that scan for magic or that can identify information about a person. As such when such an ability is used on him the other person gets a giant question mark. He also does not trigger a person's ability to sense eldritch.

Weaknesses
•Cold: As a being of fire he has a weakness to the cold. He gets hypothermia and frost bite at twice the rate a normal human does. Ice based magics do three times the damage they otherwise would.
•Eldritch Influence: He has destructive urges brought on by his eldritch half. Essentially like a voice that whispers to him, telling him to burn and cause damage. It comes and go depending on his mood and the situation, also varying on intensity.
•Mind Altering Magic: Wheh exposed to mind altering magic he will feel as if he's burning from the inside out. The intensity of the burning sensation varies on the strength of the mind altering magic.
Rowan is an orphan, and so lives in the school dorms, supported by a school scholarship. The school provides a therapist that he sees every week. He also has a part time job from which he gets money from.
•Rowan was born in a small town in a farming community in the U.S. The son of a farmer and grandson of the local pastor. Life was simple and good for him, he had friends, a normal life for him.
•He had a group of friends, they were close, they did everything together. Soon they'd need each other more than ever.
•Then, something dark made it's way into the town. An ancient eldritch being. Stripped of much of its power and stranded on Earth the being took to preying on mortals. Chosing the small town because of its isolated nature it wanted to turn it into it's own food source.
•It started with with a hiker vanishing, he was never found and was listed as missing. When in truth the eldritch had killed and devoured them.
•Then, one day, Rowan woke up to a fire in his house, he attempted to escape, as he did he saw something horrible, he saw some thing devouring the corpses of his parents. The entity and the corpses quickly vanished, with Rowan escaping.
•Rowan began to stay with a friend. During this time the horror continued. Over the next few months people continued to die, and soon people stated to suspect a serial killer.
•Investigations began, but they were unable to find the source of the killings. MC eventually took notice and began an investigation of its own.
•Rowan wasn't the only one to see the entity, other kids saw it, some he was friends with, some he wasn't. No one believed them, so they soon found comfort and support in each other.
•Then, one night, Rowan had a dream, in said dream he saw them doing a ritual that could destroy the entity. So, together, the friends would go to an abandoned farm house, and did the ritual, involving them using their own blood. The entity was summoned, but powerless and weak, and so the group killed it.
•Unfortunately killing the entity had unexpected results. Being exposed to the eldritch blood changed them all in different ways. Rowan instantly bust into flames, being badly burnt, and having fire based abilities going forward.
•The group ended up in the hospital, and from there scouts who were investigating collected them and brought them to Manta Carlos. Most, including Rowan, spent a month on the islets until they were stable and then were enrolled in the academy.
•After sometime on island he dated one of his childhood friends, a relationship that unfortunately didn't go well. That along with the eldritch parasite damaging his mental health caused him to become more desperate to remove the entity.
•Finally he went through with a removal ritual, it didn't go as planned and he died. A month later he returned, with amnesia, altered abilities and an altered body.
•Eldritch from is a commission by Armundy.

Image Credits
Eldritch form is a commission by Armundy