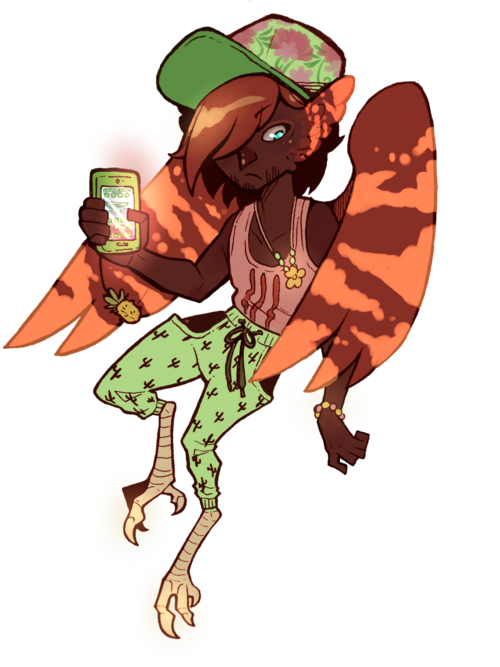 Design is owned by me. Art, design and prompt were created by Celestrial Celesol
Personality Description:
Myrrh says he knows all the unknown bands and songs, and that people haven't heard his favorite songs. In reality he likes a lot of popular music, it's just that the songs and bands he likes were popular ten years ago. He's pretty bad at actually finding the underground stuff, but believes the opposite.

In that same vein Myrrh believes that anything handmade is superior to anything made in a factory and organic/free-range/vegan/ethically sourced is better than normal foods. He will pay $8 for that organic small-farm free-trade coffee and will tell you that you should buy it too. He also hates coffee and tea but drinks them anyways because of all their benefits and to support the organic business model.

With this thinking comes an attitude of self-importance, that he's better because he doesn't follow the "mainstream" and has better tastes because he doesn't eat/read/listen to what is popular. It doesn't matter that he finds old books on philosophy boring, what matters is the sense of superiority it gives him. Deep down, the only things he truely cares for are his family, his flower garden, and developing his skills.

Active Abilities:
Wind Rider - Myrrh has a natural fly speed of 100 mph but when flying through stronger winds, Myrrh can fly as fast as the current wind speed.

Screech - Myrrh is capable of vocalizing a loud, high-pitched screech that can shatter glass and cause ears to bleed and dizziness to anyone within hearing. This ability puts a huge strain upon his vocal cords and once used, he can not screech again for several days.

Language Charm (Greek) - It translates a characters mother tongue into English, and allows them to hear English as their mother tongue.

Passive Abilities:
Harpy Physiology - Myrrh is twice as strong as a human, and can carry loads up to three times his weight. He can see eight times better than a normal human and is able to see UV light. He has three times the sense of smell than a normal human. In addition, Myrrh has razor sharp talons that can cut through metal thinner than half an inch.

Incredible Agility - Incredibly dexterous and agile while flying, Myrrh can make pin-point maneuvers and can grab objects with his claws with near 100% accuracy at any given moment.

Weaknesses:
Servant of the Erinyes - Must obey any command given to him by an Erinyes, otherwise known as the Greek Furies. Less extreme, if gods of judgement/punishment give him a command he will feel a strong compulsion to obey that command. High demons/powerful demons can provoke that same compulsion with demands.

Night Vision (Or lack of) - Myrrh has worse night vision than a human at night.

Biography:
Myrrh was born into a supernatural community on one of Greece's smaller islands. He grew up around other supernatural beings and with the meager electricity and internet the island had. It was a quiet, peaceful life, or so he thought. Myrrh's parents were devout Christian and raised Myrrh with Christian teachings.

However, there are other gods influencing life on the island, and to ignore them would bring trouble on your doorstep. His family attended holidays for greek gods and left them offerings but it took Myrrh a while to realize why his parents were uncomfortable at such events.

When Myrrh was eleven his parents made the move to Manta Carlos so they may practice their religion without needing to pay homage to the greek gods. With money they have saved they bought a modest house on the outskirts of the farmlands and enrolled Myrrh in Starlight Academy.

Resources: Lives with his parents on the outskirts of the farmlands. They own a home there and several acres. Myrrh earns some money by selling his homemade perfumes at local markets or in quiet transactions with his peers at school.

Additional Information:
Myrrh speaks Greek and can read English. He makes his own perfumes with flowers he grows on his parent's property. He makes his own compost and soil mixes and is well versed in the language of flowers and their meanings.

Original Character Prompt:
Hipster boy who listens to music that you've probably never heard of (JK you totally have - it's DARE by Gorillaz.). He also has a passion for botany and the language of flowers, and makes his own perfume. Every time you meet him, he smells different than the last time, but always wonderfully floral with a hint of smoky cedar.