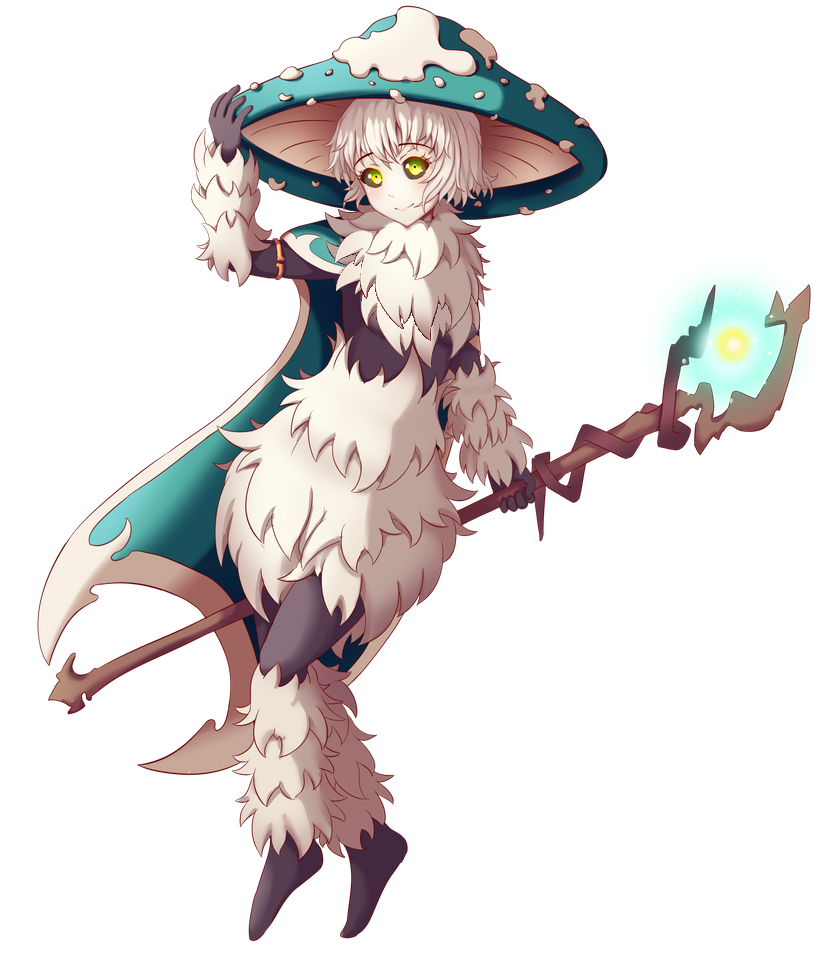 (art by DespairMode on DA, adopted and edited by me)

Myca stands at a whopping 13 inches tall, with her most notable feature being the large turquoise and white speckled mushroom cap growing out of her head. She has white neck-length hair and fluffy white bunches of fur along parts of her body. The rest of her body is covered in a velvety black layer, except for her face- which is as white as her fur. Her eyes glow bright yellow green and her stunning turquoise blue dragonfly wings are usually unseen unless in use to fly. She tends to wear a cape and stockings or socks when feeling particularly dressy.​
Personality Description:

Myca can be impetuous and a bit fickle at times but ultimately she does greatly prefer to be around others. She is intensely curious and generally cheerful unless someone sullies the mood. She has a bizarre hatred for shoes (they know what they did). She can be nosy at times and she laughs at the concept of being bound by debts and rules of politeness.​
Active Abilities:

Brush the Sky- Myca has wings that allow her to fly like an upright dragonfly, but she can shift them away to an intangible, invisible state when not in use.​
Powder Their Noses- Myca can release a dusting of spores within 3 feet of herself that cause strong, but unerringly pleasant, hallucinations for all the senses of her target. The spores rapidly lose effectiveness if no target immediately inhales, ingests or makes skin contact with them​
​
Will of the Wisps- a summonable staff made with magic stolen from a Will-o'-the-wisp. It can glow as brightly or dimly as the owner wishes and the owner can never get lost while holding it. She can use the staff to shrink up to 2 other people down to the same size as herself as long as they remain within her sight, or indefinitely if they consent to the change.​
​
Munch Munch Mycelia- Myca can magically produce up to a human handful of any kind of mushroom at a time. But she cannot predict or control which kinds are produced.​
​
Toadstool Tada- Myca can, at any time, produce perfectly sized stools made from living mushrooms for herself and anyone else currently affected by her staff's ability.​
Passive Abilities:

No Mush, no Fuss- Myca is entirely immune to diseases, poisons, toxins and drugs of any kind. She can also eat rotting material with no issue- in fact anything organic is technically edible and gives her nutrition.​
​
Sleep Colonialism- wherever Myca sleeps a cluster of soft, harmless, mushrooms sprout for a day. Repeated sleep in one place can eventually make the mushrooms no longer disappear after the day is up.​
​
Sno-cap Serenity- Myca is immune to freezing and cold, whether magical or mundane​
​
A New Day, a New Bloom- If Myca's body is slain and returned to nature she will bloom again in the nearest damp hidden location or mushroom colony within a few days time.​

Fearsome Iron- Myca is weakened by exposed iron. Even the iron content of fresh human blood could make her seriously lethargic on contact. Direct contact with more significant amounts of iron paralyze her entirely.​
​
Like a Fungus- While she can bloom with bursts of energy and excitement as much as she wants, Myca needs to spend double the amount of time she spent being active in sleep or other sedentary activities to recharge. Not sleeping for 24 hours immediately causes her to fall asleep wherever she is for 48 hours straight.​

The Sno-Cap sprites are a small colony of fae beings that had secretly settled a colony in a hidden place deep in the chilly woods of the Adirondack Mountains in New York. They eventually took the name after discovering, thanks to a careless hiker with a sweet tooth, a certain chocolatey treat that was delicious and vaguely reminded them of their distinctive white speckles on their mushroom caps and black and white coloring. Either way the community had always stayed in occasional contact with the rest of the supernatural world but heavily limited their exposure to the Narrow Reality itself.​
​
Myca had a perfectly normal upbringing within the small colony; bouncing on toadstools, beaver surfing and bobcat racing. At least until the scouts came to warn the Sno-Cap elders of the death of magic. It took months to prepare and plan their move but it was necessary, and before she knew it the entire colony was uprooted and transported to the base of one of the mountains on the northern portion of Manta Carlos. All of the younger sprites, about a dozen or so total, were enrolled with Starlight Academy to effectively be the ambassadors between the colony and the civilization in the city.​
​
Resources:

Lives in the dorms and receives a stipend from the school​
Additional Information: