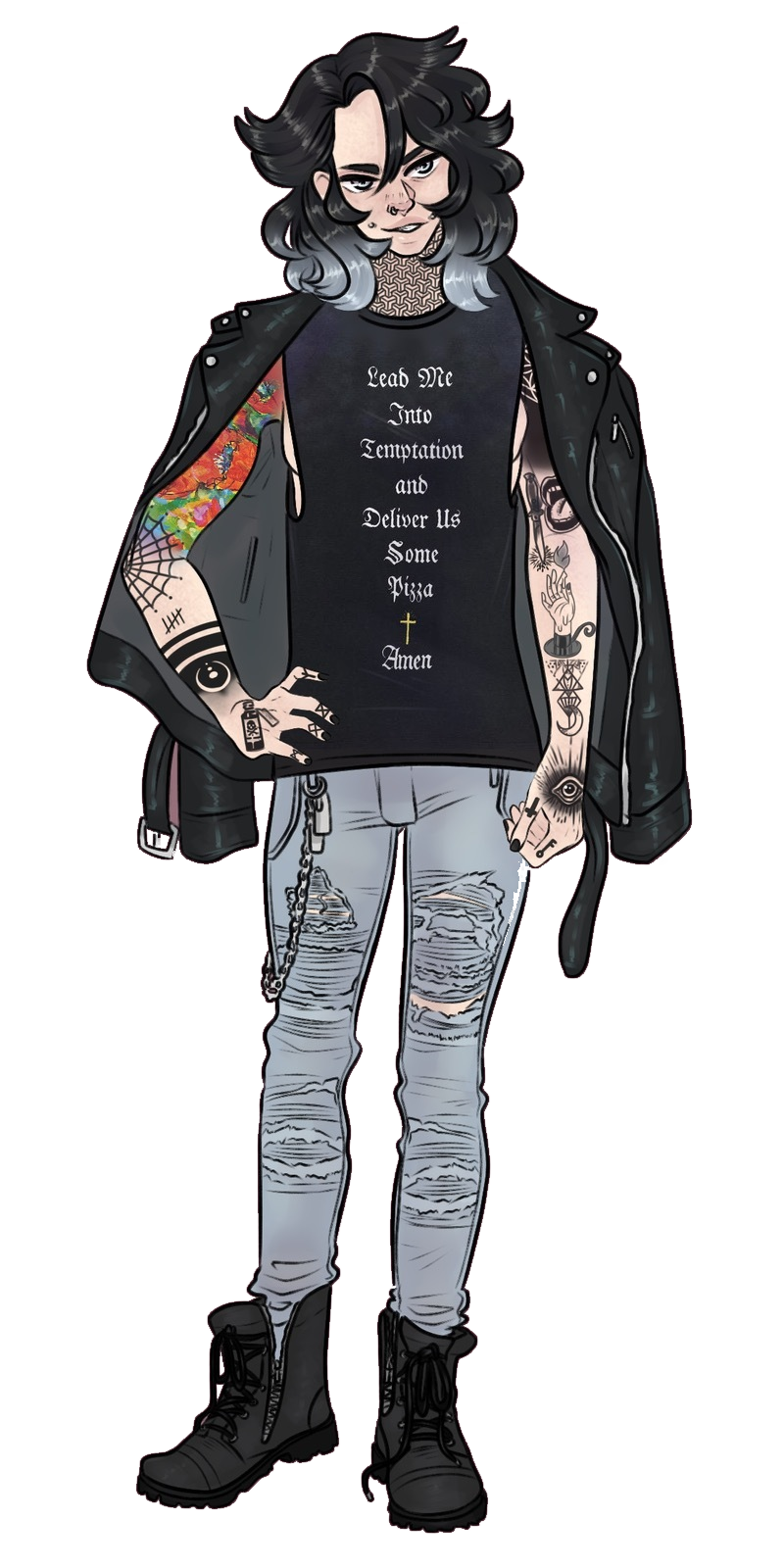 Jeremiah's new body is one that he feels reflects his dual heritage quite well. He bears the same physical markers of a del Bosque, from his build to his pale skin tone to the primarily black hue of his hair. But he also has elements that make him obviously his father's son. Sharp facial features accented with metal studs piercing his skin, slate grey eyes that seem like they were carved out of marble, and a blatant silver ombré at the tips of his hair. His new form also boasts a more modern aesthetic, with his runic sigils and scars replaced by occult tattoos that serve the same purpose but do not look so obviously ancient or Nordic.

To go along with his new body, Jeremiah dresses far more casually than he used to. He finds that he has taken a bit more after his biological father in terms of fashion choices, often dressing in a way that would put him at home among motorcycle enthusiasts and rock concert-goers. He still retains his German accent, though it has mellowed considerably since he has been exposed to so many other ways of speaking since moving to Manta Carlos.
personality
Jeremiah is, above everything else, a good person. He strives to be generous, honest, and fair with other people and to give them whatever help that he can - within reason and without causing himself too much harm or discomfort in the process. He tends to give other people the benefit of the doubt, but he isn't naïve. He can tell when his generosity is being taken advantage of and does not take kindly to such actions.

He is still close to nature and his Druidic roots, but he has begun to embrace the darker side of his magical heritage as well. He isn't afraid of magic, treating it as an extension of himself and the world around him - a tether that connects him to everything and everyone else. And with the new body that his father helped him build, he has the confidence to engage with other people without worrying about frightening or disrupting them.
abilities
Active
Witchcraft
Jeremiah is capable of using runes, incantations, and rituals to affect the world around him. In short, magic. Magic is more or less difficult for him depending on affiliations. For example, Jeremiah is more affiliated with the element Earth and less affiliated with Air.
Jeremiah's magic can be broken down into three basic types: Everyday Magic, Small Magic, and Big Magic.

Lili, Butterfly Familiar
Jeremiah has a connection with his familiar, the mourning cloak butterfly he has named Lili. She will live as long as he does and while she is touching him or his clothes Jeremiah can alter the patterns on her wings to use her as a focus for his Small Magic, rather than needing to write out his runes. Lili always knows where Jeremiah is and will fly to him if she is able.

Passive
Forest Crown
Jeremiah is immune to curses and negative magic from a member of the del Bosque family.

Walking Phylactery
Jeremiah has transferred his soul from his necklace into an artificial body created by his father and the Dark Elves of Svartalfheim. The body acts much as a human one does, growing and aging as normal as long as he wishes to; this process can be halted to grant him effective immortality if he wishes. If Jeremiah is fatally wounded, he will instead enter an inert state and cannot wake up until he has been repaired by a skilled artificer. If his body is destroyed beyond the point of repair, he will instead die.

Weakness
True Name: Aliprand Wechseln
Jeremiah has a true name which is part of what gives him his significant power. However it also harms him, as using his True Name as part of a command can turn even mundane suggestions into magical compulsions. Even saying his True Name aloud to him with ill intent can cause him pain.
biography
Jeremiah was given up almost immediately after he was born, to keep him safe. Put up for adoption, he ended up in the care of a couple of hedge witches who noticed the baby boy's magical potential.

His early life with his fathers was idyllic. He learned magic and helped cultivate their gardens. Living in the woods, away from most other people.

His life was shaken hard when he was around fifteen however, when he used magic in town to help some locals. Word got around and a group of zero tolerance witch hunters set their sights on the family. Jeremiah's fathers died trying to keep their son safe, and in the end the boy had a surge of magic that took the form of the one thing on his mind. I need to get away from here.

Jeremiah ended up in Svartalfheim, the home of the Dark Elves from Norse mythology. His biological father's home. The father he soon met, who took him in temporarily in order to allow him to recover from the injuries he sustained when using such a powerful ritual unaided.

Jeremiah, over time, learned his heritage, among other things. He learned why he was given up and that his mother had moved to the island of Manta Carlos. After two years of living with his father, Jeremiah hugged him and stepped into a ritual circle to go see what the rest of his family was like for himself. The last words his father spoke to him we're, "Be careful."

An accident with a botched magic ritual caused Jeremiah to lose his physical form and unintentionally become a lich. After months of trying to keep his glamoured human form from failing him, he went to visit his biological father again to seek help in crafting a more permanent solution - which he gained in the form of a dwarf-forged human body that his soul now resides within.
Resources
Lives at the school. Has his stipend, and not much else.
additional info
Joined the gardening club and a club for magic users, because they make him feel comfortable.

Image Credits
Face Claim is original art owned by me, designed and created by Toothaches Art.