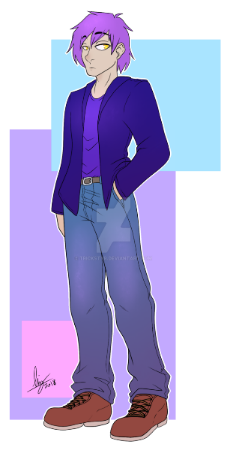 In human form there's not much about Ishvi that stands out as unnatural other than his mussed bright purple hair and golden eyes. He has a dagger-shaped burn scar on each palm and another dagger stab wound scar on his chest over his heart. At 5'9" he's neither particularly tall nor short and has a slender, athletic build. Ishvi's skin is always lightly tanned and free of blemishes. He has a youthful face that can be expressive but is usually neutral. Ishvi's style is casual with a hint of punk, often with a jacket of some sort. He has a single piercing on his left ear.

Nightmare form - Ishvi's nightmare form is the same height and general build as his human form but sexless and made completely of a purple substance that appears to shift like shadows though it is as solid as flesh. His scars appear on this form as well. There are two large deformed black-feathered wings sprouting from his shoulders. He has no hair or facial features except glowing yellow holes for mouth and eyes. He still has a tongue and teeth.

Personality Description:
Even after 5+ years on Manta Carlos, Ishvi is still wary of demons but is aware of and admits to this bias. He struggles to overcome it, especially because recent events made it worse, but has a harder time dealing with fallen angels. He is also very uncomfortable around half-angels. He considers himself a worthless half-breed but doesn't look down on others in the same situation.

Ishvi is a trained fighter with a violent nature that he is at turns ashamed and accepting of. He is unopposed to violence, execution, and even torture done legally, but he feels bad if he gives into his own violent urges. Dutiful, responsible, and obedient, Ishvi looks up to his superiors and has a deep hatred of those that abuse their position. He is driven to impress, to prove himself, hurt by his own perceived failures. For the half-angel justice is paramount - he is geared more to punishment than mercy or leniency. Yet he also has a protective nature, wanting to comfort and help those who are hurting.

Honest for the most part and a very bad liar on top of that, Ishvi still has the tendency to bottle up and hide any negative emotions, leading to a pattern of erratic and self-destructive behaviour when he can't contain them. It was a matter of personal pride that he didn't fall, but now he's lost all sense of purpose or hope in life. Socially awkward, he doesn't have anyone he feels close to and attempts to deal with everything himself. He has been attempting to socialize more with varying degrees of success.

Ishvi doesn't usually do well with children but likes petting and playing with small tame animals, especially dogs. He enjoys hiking, swimming, and other solitary, quiet pursuits that take him out into nature. He is very drawn to water and to the ocean in particular.

Active Abilities:
Nightmare Form - Can switch between forms at will and stay in them indefinitely. Sometimes switches to nightmare when angry or stressed. Can fly about 50mph in nightmare form.
On changing to nightmare form produces a 25' burst of fear (enough to make someone kind of want to hide but not terror) that lasts 5 minutes and affects any sentient being who sees him at the moment of his shift and can feel fear. Anyone affected will not feel the effects again for 24 hours no matter how much they see him shift within that time.

Intangibility - If in shadow and in nightmare form can become intangible for 30 minutes. However long he stays intangible he must rest for an equal amount of time before using ability again. Being hit anywhere with a bright light will force him tangible for 15 minutes. When intangible even a flashlight beam feels like being stabbed.

I know what you did - If someone feels guilty about something and he's within 5 feet of them for 30 minutes, he can tell the person what they believe they're guilty of, regardless of whether they actually are and what it is (could be as small as eating a piece of cake or as large as believing they killed someone). Only him and the person will hear what he says, and he can't repeat the knowledge gained this way. To anyone else, including recording equipment, what he says will sound like white noise. Causes an agonizing migraine for him for 10 minutes after, increasing by 10 minutes with each use. Penalty resets each day after sleeping.

Passive Abilities:
Guilt Sense - Within 10 feet senses feelings of guilt and the strength of it but not what a person is guilty about or if their guilt is justified.

Don't lie - Within 10 feet senses when someone is deliberately lying (not just misleading or telling half truths), if he can hear them. Doesn't affect telepathy or non verbal communication. Doesn't let him tell how they're lying or what the truth is.

Enhanced Strength - Can lift and carry up to one ton.

Immortality - Stopped aging in his twenties. If killed will respawn in a limbo realm and spend a few weeks there healing before returning to Earth. Can be permanently killed with weapons forged to harm divine beings or by high-ranking archangels or demon lords.

Weaknesses:
Honesty - Cannot lie about his own guilt if questioned and cannot deny any of his own actions. If he does lie about anything (intentionally), anyone that hears him can sense that he is lying.

Guilt Sense Headache - Gets a mild to severe headache within 10' of people feeling guilt depending on the strength of the feeling.

Painful lies - When people lie within 10' of him each word feels like a painful stab in his head. His own lies are included in this.

Nocturnal - Bright lights and sunlight hurt his eyes. Tired, half strength during the day. Direct sunlight will cause him to get a mild sunburn almost immediately but sunblock protects. In nightmare form direct sunlight causes third degree burns and even overcast days burn mildly.

Shadow magic vulnerability - Despite any mitigating factors (defensive buffs, partial hits, etc), shadow magic damage will always be the same as Ishvi taking the attack head on. And he cannot break physical bonds made with shadow magic.

Biography:
There was an angelic outpost in the heavens at war with demons. One angel, injured severely by a demon, still wanted to fight. In order to have stronger offspring she decided to have a child with a nightmare thinking that providing a weapon was worth the one tiny sin. The nightmare father didn't stay once the child wass born, and for her pride and transgression the angel mother was punished, having her child taken away and adopted by another family.

This child was Ishvi, who was raised by birth knowing he was a second class citizen, not a full angel, and only there because the angels had mercy on him. There was never any overt abuse, but angels could be still be bullies. The half-angel grew up constantly watched and judged, criticized harshly for any fault but with a sort of constant expectation that he would fail because he was less. His parentage blamed for everything, though this didn't allow him to get away with things. Eventually, Ishvi's biological mother fell and was exiled. This made him even more determined to be the best angel ever.

He trained hard but never seemed to be good enough. And his mother's falling gave the other angels even more ammunition to use against him. So at 16 years old he left the outpost for Earth hoping to find some way to prove himself. This was before he was old enough to join the outpost military. People scoffed and said he was just following his mother's footsteps, but the defiant teen was ready to prove them wrong.

Flying over the ocean he became tired, fortunately washing up on Manta Carlos. Once on the island he was set up as a high school student. None of his letters home were ever answered, so he decided to become a police officer, both because it was the closest thing to the military and it satisfied his sense of justice. He took the junior cadet program, going straight into the police academy and then into the police force.

The month he passed his probationary period he was hit with a lot of bad news, some of it life changing. This included the fact the archangels had called him fallen and exiled, and his entire outpost had been destroyed and the angels killed permanently. Unbalanced and erratic from the things he'd learned, as well as his contact with survivors, he met one of the demons responsible. His behaviour led him to be placed on leave. He then dueled this demon, lost both the duel and his tongue, and finally resigned from the force.

After dying and coming back Ishvi returned to school with no idea what to do with his life.

Resources: Living in dorms at school. Has a small amount saved up from his time as a police officer. Has a part time job as a stocker at a pet shop.

Additional Information:
November's Gift: A small melanite statue in the shape of November. If held in the hands, it eases pain, making the holder comfortably numb.