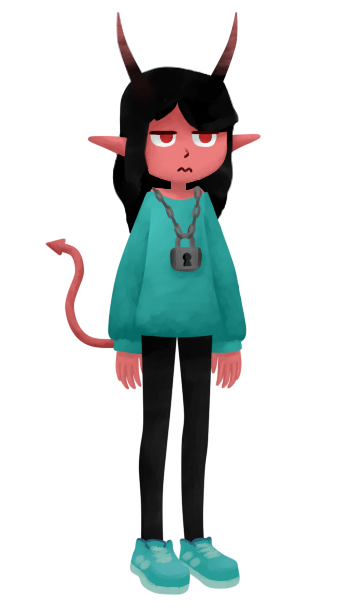 ​
Ida is not very big, standing at about 3 and a half feet without her horns. She has some standard imp features to her, such as her red skin, the long horns protruding from the top of her head, or the tail ending in a spike like shape. Her eyes are red and her hair is black, with rather long pointy ears poking out from her hair on each side. Relative to the rest of her body, her torso is small and her limbs are long. Her fingers are long and sort of pointy but not sharp like claws.

As for what she wears, it's pretty common to see her in black leggings with her turquoise running shoes. Her top goes through a little more variation but in general she wears a good number of sweaters. Also on her body at all times is a chain necklace with a lock .

Ida is always looking to lend a hand to those around her and will actually go out of her way to find people who could use her help. Not because she's a good person, but because she wants to remove her necklace and she can do so by completing 10000 good deeds. The reality of her personality becomes more evident when the going gets tough or if someone sticks around after she's helped them,

She has a bit of a temper, and when somebody is harder to help than she originally anticipates, she will easily get frustrated with them and make matters worse. This lack of patience generally makes her bad at helping depending on what needs to be done. She rarely considers the big picture and more just looks at how things will affect her.

She is quite the prankster and likes to mess with people, even if that gig has sort of been put on hold while she tries to get her powers back. She sometimes incorporates this in to how she might help someone, going about it in questionable ways.

While she doesn't appear to have an ounce of empathy in her at most times, she can end up feeling guilty if she really wrongs somebody. She can also warm up to people if she grows fond of their personality, in which case she will only sometimes act terrible.


Active Abilities (None of which work at the moment, thanks to her lovely necklace):

Ida was summoned by a witch named Elodie in another world about twenty years ago, and has no memories from before that moment. Elodie had somehow gotten a hold of her true name and used it to create a bind between herself and Ida. They lived in a small village of witches, most of which were not particularly strong. This witch was the only one that had even managed to summon a familiar.

At first, Ida was very disobedient, the witch needed to use her true name to get her to listen and was always having to clean up after any trouble the imp would cause others in the village. However, after a year or so, Ida grew to respect Elodie and they started to form more of a friendship as opposed to a master and familiar relationship. Ida was still an annoying brat, but Elodie had learned how to deal with it.

Life was good for a long while. Elodie, being regarded as the strongest witch in the village, got to do a lot of exciting stuff, which more or less kept Ida entertained and out of trouble. But it could only last so long. Eventually, Elodie bit off more than she could chew and ended up getting taken out by a giant plant creature.

This left Ida free, but honestly pretty depressed. She wouldn't admit it to the townsfolk, claiming instead that she was glad the witch was gone and that she could do what she wanted now, but she really did miss Elodie.

With nothing to entertain her, Ida created her own fun, often at the expense of the other villagers. She spent her days pulling pranks and messing with them to get their attention. This, of course, annoyed the townsfolk and led to them acquiring the charm of benevolence. Then all they had to do was sit out in the open and brag about how great their new necklace was and it was only a matter of time before Ida took it and hung it around her neck.

The charm locked her powers away and left her having to complete ten thousand good deeds before she could unlock the charm and get them back. She got pretty upset with the villagers and couldn't bring herself to help them, so very little got done for a while. It wasn't until a passing traveler came by that she did her first good deed.

Out of luck, that traveler happened to be a very kind person, and upon hearing Ida's predicament, they offered a hand. They opened up a portal and sent her to Manta Carlos Island, another world where she would supposedly have far better luck.

In her short time on the island, she found a man who let her stay at his house until she could find a job and get enough money to survive on her own. Another stroke of luck, although the man makes it abundantly clear that she isn't allowed to stay there forever.

Gets everything she has from living in the Grovefire Manor.

Artwork is by me.

Image Credits
Artwork in this profile is by me