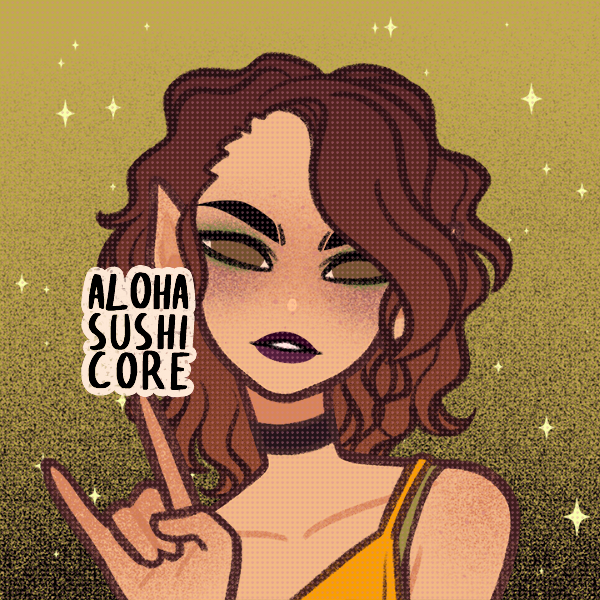 Flicker is 5’5” with a lithe and somewhat muscular body. Her skin carries a warm golden hue with mid tonation. Flicker’s eyes are sleek, slanted slightly upwards, and colored in a sagey brown. Both her eyes and her irises are somewhat overlarge, and her lashes are full, dark, and sleek. Flicker’s hair is thick, wild-wavy and warm brown in color. Her ears are slightly pointed, her lips are full and naturally quite dark, her nose is small, and she has a scar through her left eyebrow (often hidden by fringe). Altogether, Flicker’s features are somewhat fae-like. Her natural scent is somewhat earthy. She tends to stick to trendy, college age thrifted clothing, and always wears at least one leather, fur, or cloth accessory. Flicker has a thick, hard-to-place accent when speaking her native language, or without her charm.


Personality Description:
Flicker doesn’t know who she is yet, but she’s trying to figure that out. She’s somewhat quiet and a bit reserved by nature, but is curious about modern life after being removed from it for most of her history. Counselling and remedial lessons have done her well, but she’s still new to the island and is trying to find her path, and her people. Flicker is rather assertive, gets a bit impatient with indirect speech, and tends to feel more comfortable with day-to-day or hands-on concepts, rather than the abstract. She doesn’t care for dishonesty, especially because she has little experience with it and finds it hard to detect. On that note, Flicker herself tends to be very honest, if a bit secretive at times. She has a kind heart, but she’s guarded, and just wants to build a life where she feels both safe and informed.


Active Abilities:
WOODLAND SELKIE
Flicker can shift into any mundane mammal that typically lives in an upper North American forest. While in an animal form, Flicker retains her sentience but is limited to the physical capabilities of her form; i.e. she cannot speak, except to other woodland selkies or those with powers to surpass this limitation. Woodland selkies can always understand each other, regardless of form. With animals that match her form, she can only communicate with them to the level capable of the animal naturally with others of its species; i.e. she can tell a bear to run away or come closer, but discussing philosophy is out of the question. Flicker only retains this ability if she has physical access to her coat. There is no time limit on her animal forms, as this is her “natural” state, but she will feel compelled to shift into animal form at least once (for at least an hour) every other day if she is able. Upon death, Flicker remains in whatever her form was at the time.

ITEM: SELKIE COAT
Flicker’s “coat” has been enchanted to take the form of other accessories, in order to be more practical for day-to-day life on the island. This accessory is always made of fur, leather, or cloth, and must be one solid item. Skin-to-item contact is required to use her active powers. It melds into her body when “in use;” it can only be removed when she is in human form. Flicker is unable to lose her skin unless it is hidden from her; if simply lost, she will always find it, but if it is intentionally hidden, it is gone.

COMMON ITEM: SIMPLE LANGUAGE CHARM
This is the standard language charm provided to most characters. It translates a character’s mother tongue into English, and allows them to hear English as their mother tongue. For Flicker, it translates her native Woodland Selkie Dialect to English and vice versa.

Passive Abilities:
NATURAL INSTINCT
In practice, this means she is more attuned to most characters who, for reasons related to anything from power to demeanor, may register as “predatory” or “dangerous.” Flicker also has a faster reaction time than normal humans, and may gain a stronger feeling of “not right”-ness than a human when something is wrong in her area. Additionally, this sense can function the opposite way as well: if a character has a power set, species, or other quality that is particularly close to her own (such as fae, druids, or other shifters, for example), she may naturally feel at ease around them. Finally, she can always identify another woodland selkie near her, and feels a slight pull to selkies in general. This power extends as far as her senses can detect, growing stronger with proximity and/or threat level.


Weaknesses:
SKIN STEALING
As stated, Flicker has no limit on shifting into forest animals, but she must do so for an hour at least once every other day in order to maintain her health. If her skin is stolen, however, she cannot shift, and will quickly begin to grow restless and irritated: both because she can sense its loss, and also due to the lack of shifting. However, Flicker will know who stole her skin, and feel an unwilling pull towards them, as well as a general sense of obedience she can resist with difficulty. This grows stronger over time, as does her restlessness, until it becomes a full-blown obsession over several weeks to months. At six months, her health begins to deteriorate, and she will die by a year. This timeline be extended by living among the forest, but only until three years.


Biography:
Flicker is from a small nomadic group of her direct family (father, mother, older brother) in the Canadian wilderness. This group was part of a larger woodland selkie framework, with each family tending to drift along their own paths and cross every now and then. The groups tended to have basic knowledge (and fear) of modern life, and avoided interaction with it. Flicker spent most of her life in these scenarios.

Eventually, some time after her brother split off to begin his own family, Flicker and her parents were traveling as elk through protected forest lands. Poachers shot and killed Flicker’s parents, but Flicker herself escaped. Panicked, she roamed aimlessly, wandering through a few towns before stumbling blindly into a city. She got lost here, starving and alone, completely out of her element. After a rough few weeks, a Starlight Academy scout approached her, and she took their offer. Since then, Flicker spent a few weeks in remedial classes and modern-world-adjustment counselling. She’s now looking forward to the beginning of a new life.


Resources: Flicker really doesn’t have much. She shops at thrift stores for trendy clothing, buys cheap bath products, and typically subsists off the resources the academy supplies her. Flicker lives on campus in an assigned dormitory and is seeking a job.


Additional Information:
Flicker speaks limited English, and her native language is used (to her knowledge) only within her woodland selkie communities (though it is not always needed due to their inherent ability to communicate with one another). In terms of writing, they stuck mainly to very basic symbol-style script. Flicker is still learning to read and write, therefore, and is trying to better learn English without a charm.
Reactions: Etlaayz