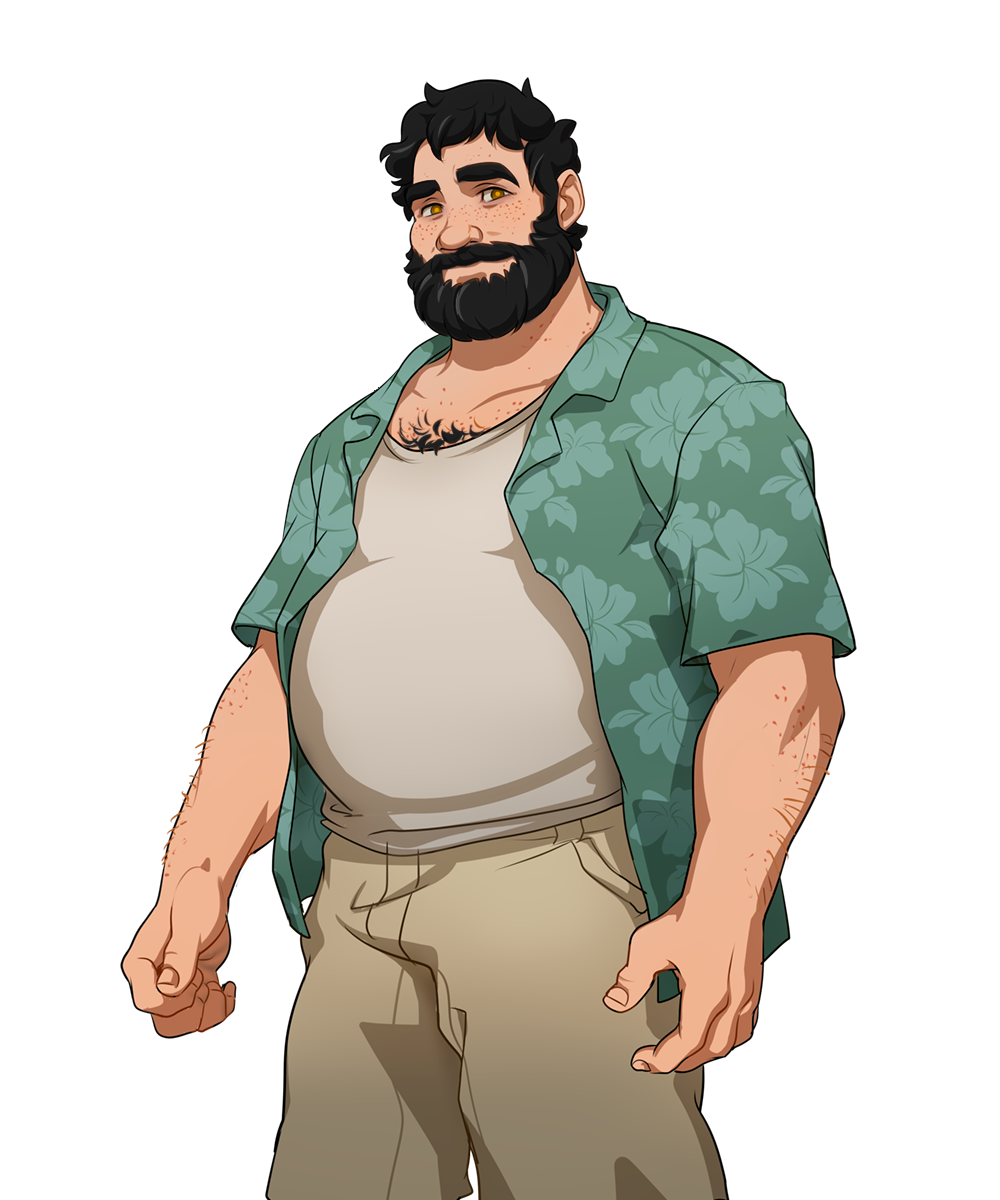 Image Credit: Official Art of Brian from Dream Daddy with edits by Kada on Starlight Academy.

Douglas, or Doug to his friends, is a large man in several senses of the word. Standing 6'4" with a strong, hefty build from his love of food and competitive weightlifting, he naturally takes up a lot of space and is pretty easy to find in a crowd. He's got a lot of the standard Blake family traits: curly black hair that he keeps short with a thick, short beard, bright yellow-amber eyes, and the slightly rarer trait of freckles and moles all over his body. He spends less time out in the sun than some members of the family, so he doesn't have as much of a tan as they do. But when he takes his shirt off you can still see a light farmer's tan.

Though he can dress professionally for work, Doug is happiest wearing what he affectionately calls 'dad clothes.' He's taking the fact that he lives on an island fully to heart, wearing khaki shorts and flip flops as often as he can and pairing them with touristy looking Hawaiian shirts and t-shirts from his favorite pop culture media.

His hybrid form appears to be a vaguely humanoid wolf creature, standing just over seven feet tall with a broad build. His full wolf form stands this same height at the shoulder when on all fours. Both forms have black fur and the same amber colored eyes as his human form.
personality
Doug is in many ways a man's man. He crafts his own beer, does his own woodworking, and he has more than one strongman competition trophies. But he is also a member of the Society of Creative Anachronism, has written three books for National Novel Writing Month, and can play the saxophone decently enough. He's shameless in what he loves and throws himself at any new passion with as much vigor as he can, and that has made him into a really curious and open-minded person. He is willing to try just about anything at least once, and will be open and honest about how he feels about it.

Jovial to a fault, Doug tries to be the voice of reason when things get tense and he acts very much like everyone's chill uncle - even towards the older members of his family. His anger is a pretty cold affair, and when he stops laughing and trying to make light of a situation you know you've succeeded in pissing him off. Living like he does though, he tries not to hold grudges and to give others the chance to better themselves rather than assume that they will always be as bad as their worst moments.
abilities
Active
Wolf Shift
Doug can shapeshift at will between his human, hybrid and wolf forms. While in his wolf form, his natural abilities double.

Gift of the Black Wolf
Doug can turn another person into a werewolf. By biting them in his wolf form, he can mark them with the Blake family strain of lycanthropy. If anytime within the next twenty-four hours that person is subjected to severe traumatic injury, the blessing will take effect and transform them into a werewolf. Werewolves created in this manner are magically inclined to obey the werewolf who turned them for one hundred days.

Passive
Physical Superiority
In his human form, Doug's physical abilities are three times greater than that of a human of his age and build. His body has reached it's prime and his aging has slowed down significantly. Barring an untimely demise, he will live roughly twice as long as a normal human.

Superior Senses
Doug's senses of hearing and smell are on par with a wolf's and he can see in near total darkness as well as he can during the day.

Resilience
The Blessing of the Black Wolf heals almost all harm. Injuries, poisons, and diseases are recovered from in a tenth of the time it would take a human. There are a few exceptions however: injuries suffered from the claws or fangs of another werewolf, injuries caused by pure silver, and the poison of the wolf's bane plant.

Weakness
Full Moon Transformation
During the full moon, Doug is forcibly shifted into his wolf form and driven feral until the night ends.

biography
Born as the nephew of Carl Blake, the at the time Alpha of the Blake pack, Douglas grew up with high expectations but also a lot of advantages. He excelled in school, joining his high school band on the saxophone, and ended up going to a good university where he got his MA in Accounting and Personal Finance. He joined the SCA in college and learned his love of woodworking there. Eventually he returned to his family, acting as the accountant for their ranching businesses for years. He was a favorite to become the next Alpha when Carl eventually passed away, but no one could have expected the news of the Death of Magic.

Reeling from the news, the whole family was uncertain as to what to do about it. Douglas, for his part, wasn't opposed to the idea of staying and letting his werewolf heritage slowly fade away. His identity wasn't based around being a werewolf like some of his family. But he also knew that the gift of the black wolf was something special and that it would be a shame for them to lose it. But while he was still sorting out how he felt and what he should do, a younger member of the pack stepped up and took charge.

Douglas has enjoyed his life on Manta Carlos to a degree. It's a new experience, which he's always open to, but he's also a bit saddened by the fact that his family has been split up and that he can't really do all of the things that he used to. He tries to keep his chin up however, and make the best of the situation that he's found himself in.
Resources
Douglas lives in the Blake family house and helps out with finances working as a personal accountant.
additional info

Image Credits
Official Art of Brian from Dream Daddy with edits by Kada on Starlight Academy.