Appearance Description: Destra stands at 5'10” with white hair, dark skin, and red eyes. He sports a set of elongated canines, and his eyes will periodically shift to a more reptilian appearance if he's feeling threatened or agitated. He's also covered in scars. Most of the time the only visible scars are located on his face and neck. Destra has deep scarring on his torso; several claw marks, stab wounds, as well as one diagonal scar that runs from near his left shoulder, down his torso. There is a bite wound on his right shoulder, and on the left side of his lower abdomen. Destra's arms and legs are also marked bite marks and slashes. with With regards to his clothing, he prefers the outfits he wore when he was back in his world. Though he can be reasonably stylish when he wants to be. 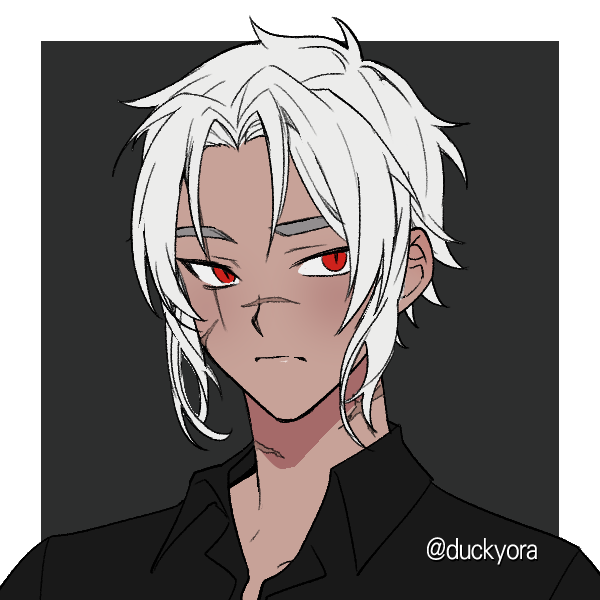 His dragon form is now bipedal, and stands ten feet from head to toe. He now possesses more spikes along his back, and his scales are black in color with red accents. He has adapted his body for combat, or more specifically establishing dominance. His scales can fan out, allowing him to create a rattling sounds. His hind limbs are strong, and still capable of gripping objects. He also possesses a very long and powerful tail. 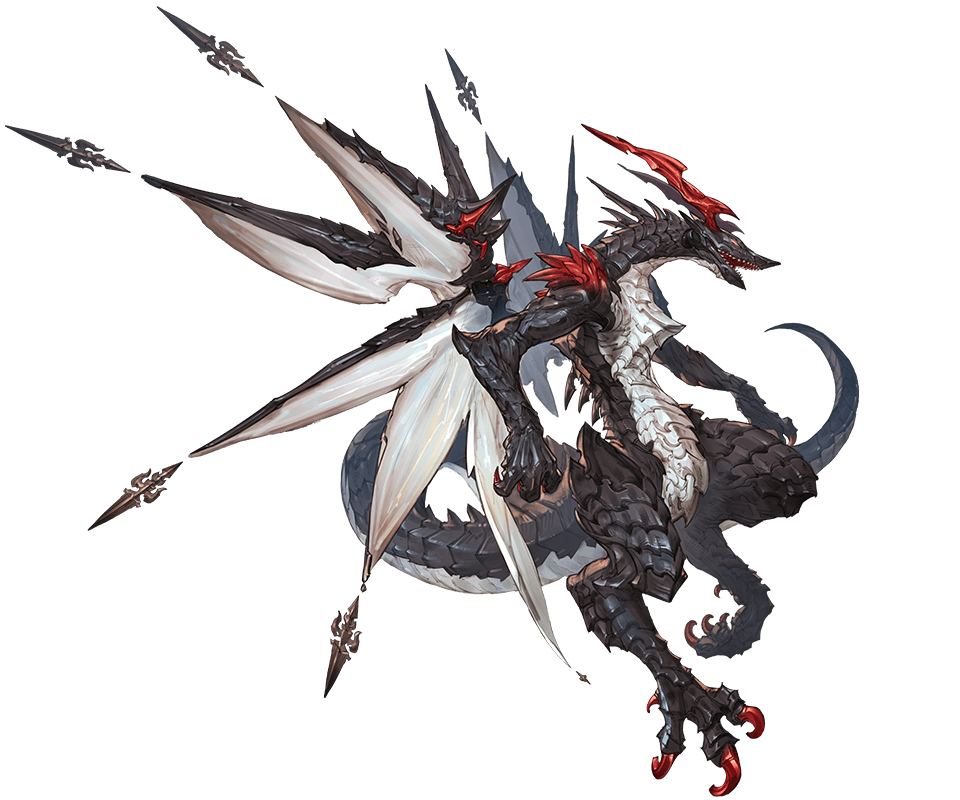 Personality Description: Destra is very much a product of his environment, having more or less survived on his own for the brunt of his life. While his mannerisms may make him seem somewhat feral to a degree, he's actually reasonably intelligent. He has a knack for fixing and improvising tools. He's quick to adapt to new environments. Destra is a prideful, independent sort just by virtue of being a dragon. He will never share his food either, and he always has food. He's not one to easily get attached to people, however he does keep mementos of people he has gotten close to over the years.

Active Abilities:
Red Lightning: The signature of the Barathos clan is utilizing their unique lightning to form other abilities outside of the conventional ones. Destra's ability functions as a sort of anti-ability emp burst that causes anyone within fifty feet of him to lose abilities for a minute. He can only use this ability once every five minutes, due to the amount of build up required to release a substantial amount of energy. This only works on currently active abilities, and not natural traits. For example, it would stop someone mid shift and revert them to the form they were shifting from. Or a fire user actively controlling fire, however a dragon's natural fire breath would not be shut off.
Destra can also fire red spheres of electricity that do normal electrical based damage.
Red Lightning- Sands of the dead: Destra can channel his lightning into a force that simulates the energy found in necromancy. It is not true death magic, but it can animate sand in the form of ten skeletons, which he can control. These skeletons are as durable as normal human skeleons, and as strong and fast as an average human. These skeletons are charged with red lightning, and can be ordered to detonate with enough force to knock a person over, blasting sand into their eyes etc. Like mindless zombies damaging them enough will slow or stop their advance. Water however is the quickest and easiest way to dispatch them as they simply wash away.
Red Lightning- No High Ground: When engaging an opponent in combat, Destra can naturally match their physical abilities. This increases itself proportionally when engaging multiple opponents. If his opponent is using a weapon of some kind, any object in Destra's hand will become as strong as the weapon used against him. His weapon will not however take on identical magical properties as said weapon, only its durability. Should someone swing an indestructible sword at him for example, a wooden stick would be able to match it in strength. This does not extend to ranged weapons. If fighting multiple opponents, Destra's stick will match the strongest weapon present.
Red Lightning Dismemberment: Destra's standard offensive lightning(not any of his other red lightning based abilities) now comes with the added effect of tearing things apart on a molecular level. This leaves his targets cut up and shredded. The level of destruction is directly proportional to how conductive the target he's hitting. An average person may find themselves covered in small nonlethal cuts all over the targeted area. Someone who is weak to electricity may need to seek medical attention, assuming they can't regenerate. The same goes for materials such as metal. Destra can tear through it with relative ease. However insulating materials such as rubber won't be effected at all.


Beauty Manipulation: Destra is capable of manipulating the beauty of himself, objects, and others via physical contact. He is capable of manipulating to either end of the spectrum, making someone supernaturally beautiful, or ugly. The permanence of this ability is dependent on the amount of time spent on an individual. A simple tap will only last a two minutes if the target is brought to a full state of perfection or imperfection. Other people witnessing this may be distracted, either because they're so attractive or incredibly hideous.
For inanimate objects, they will have similar effects on people seeing them. A rock will look like something worth adding to a collection. Or a someone might be more inclined to drink a glass of water because it looks refreshing. On the opposite end, people will shy away from objects if they are made ugly. The effects stil only lasts for two minutes.
In order to get more permanent effects, physical contact must be maintained for at least an hour. This process is something like sculpting the person or object. This process can take longer if extra features the target has are added. This does leave Destra tired when it's over.
When utilizing this ability on himself, it more or less works like shapeshifting. When Destra is in a state of physical perfection, people will find him much more approachable. Making himself plain, makes him difficult to notice immediately. Finally, making himself repulsive will make other people afraid of him, and more difficult to approach.

Dragon slayer swords: They are exactly what they sound like. While they don't do anything truly impressive, they are capable of piercing dragon scales. He keeps them locked away in a small pocket dimension only he can access via a device worn on his person.

Shifting: Destra can shift between a human and dragon at will. He is able to partially shift, though he typically focuses on his legs and scales which he can fire as projectiles with enough force to punch through steel.

Passive Abilities:
Physique: He possesses very acute senses of hearing and smell which are comparable to a wolf's and his sight is on par with a hawk's. Destra's scales are hard, sharp and can be fired like quills with enough force to pierce steel. He can also fan them out and shred opponents and prey. His talons and horn possess a similar sharpness. Destra can lift one ton, and possesses heightened reflexes enough to dodge a bullet in his human form. His running speed is roughly sixty mph.

Storm Ruler: Destra feels like a dominant presence to those around him. When he’s agitated or asserting himself areas he’s in will darken, as if a storm has come in. His shadow is constantly in its dragon form now as well. Destra’s abilities effectively double when there is a thunderstorm.

Smooth Talker: Destra is able to persuade people into seeing things his way. People are generally more inclined to believing him even if he outright lies. If there is clear evidence proving otherwise, then people won't believe him, or the belief in the lie will be shattered. This ability does not effect people who are immune to mental manipulation.

Destra possesses a functional immortality and won't die unless slain.

Weaknesses: Destra's element is lightning, as such he can directly counter both wind and water elements. Earth based elementals resist many of his attacks. Natural insulators also block his attacks. His senses can be overloaded by things such as sudden bright light, loud noises, and strong scents. Dragon slaying and magically charged weapons are recommended when engaging in direct combat with him.

Resources: Lives in the dorms at school. Head of the Barathos clan. Works for Straga as a bartender at the Skyward Dragon Pub.

Biography: Born and alone in the blasted wasteland that he and the members of his clan call home, Destra's chances of survival were low. He'd hunt like an animal, through his early years, while observing humans from afar. For such weak creatures, they seemed to manage surviving this environment very well. He eventually learned how to take on a human form and managed to pass himself as an orphaned survivor of a monster attack to a passing caravan. From there, he learned how to speak properly, work with machines, and even read. As he grew older he learned dragon and monster hunting techniques.

He'd stay around caravans until suspicions that he wasn't human began to rise and left them. Except at the point that he wound up encountering the leader of his clan, Straga. Who was on a return trip to his home to investigate him, the unaccounted for clansman. During the ensuing battle Destra revealed himself as a dragon, and upon his defeat was dragged to Manta Carlos on Earth. He's now enrolled as a student and in a much different environment than what he was used to.