Appearance Description:
Delaney has Hispanic/French ancestry and leans more towards her Hispanic side. She has light brown skin and a little mole under and just to the left of her chin. Her hair has turned pure white, though Dela has dyed the tips neon green. Delaney's hair is shoulder length and often styled with the back tied up into a bun and her pink sides pulled into little pigtails. Aside from her hair, her most notable feature are her solid black eyes, sclear, eyris, pupil, all totally and unfathomably black.

Thin and that's about it, Delaney is roughly 5'1" tall and weighs 110lbs. She has a wide variety of styles, switching between classic and pastel goth aesthetics. All her clothes have pins and buttons on the left sleeve/pant leg. Delaney uses these to identify what clothes she is wearing and embraces it as a style choice as well. 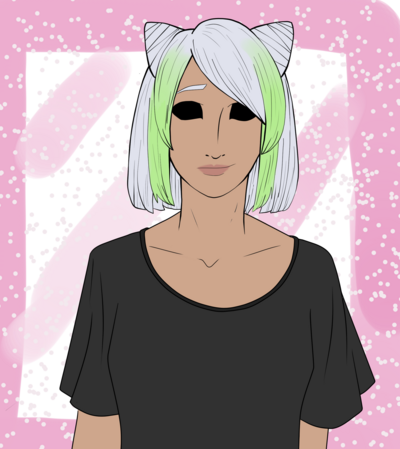 Personality Description:
Delaney is a smart-mouthed, sarcastic lil' rebel who will bluntly say you suck to your face. She accepts no nonsense or shallow platitudes and for the most part doesn't give a flying duck about what is polite or not. Delaney is especially sarcastic to those who treat her with baby gloves because she's blind. Yes, she's blind, but she's managing quite fine. She is working so hard to regain her independence and doesn't need people butting in and acting like she needs help all the damn time.

Underneath her cool, goth exterior, Delaney is a caring girl who loves her friends and her dog. She's protective of those she loves, and will fight anyone who hurt them. After all, they'll look bad for hitting the blind girl who was just trying to look out for her friends.

Knowledge, as relevant to her ability, is facts, information and skills acquired by a person through experience or education. Emotions, intuitions, gut feelings, funny-feelings or born-with (innate) knowledge are not applicable. Nor does the ability to perform a skill transfers over.

Secondly, Delaney can touch a book or electronic device and absorb the knowledge held within. She can hold on to this knowledge for as long as she’d like, but to learn it she must temporarily forget knowledge equal to the amount she absorbed.

The Library​
Delaney has gained her own little pocket dimension and is sent there every time she falls asleep. The Library contains a vast wealth of knowledge on a variety of topics. While in the Library Delaney learns twice as fast as normal. While here she has her full eyesight but cannot hear the whispers that speak to her while awake.

She can bring people or new books or items into The Library by falling asleep while holding them. Objects will stay even after she wakes up, while people will return to the normal world upon waking up.


Whispers from Beyond​
Delaney can hear whispers of unknown things narrating the present. The range of events these whispers can reveal extend from right next to her, to cosmic events thousands of light years away. The events are narrated as they are happening, as these voices only speak of events currently happening.

With concentration she can narrow events to everything within half a mile of herself. While concentrating she cannot hear anything other than the voices and will be vulnerable for as long as she is focused on the voices.


Whispering Interference ​
The constant stream of whispers in Delaney's head protects her from mind-affecting abilities such as compulsions, mind reading and mind-control. When one attempts to use such an ability upon her they are bombarded by loud, incomprehensible whispers until they stop.


Eldritch Sense​
When an Eldritch being is within fifty feet of Delaney, she can sense their presence and can pin-point exactly where they are within that range.


Not Quite Human Anymore​
Delaney can bend and stretch her body as though it were made of rubber. She could bend her arms and legs several inches in way those limbs should normally never be pulled and can stretch herself out to make her limbs several inches longer. Eventually any bends or stretches, usually within a few hours, will shrink back to her normal proportions. In addition, the elastic nature of her body protects her from physical or blunt blows which would bounce off her.

Blinded By the Elder God​
Delaney was blinded by her encounters with an eldritch entity. This blindness was caused by witnessing that which should not be seen by mortal minds. It goes beyond just losing her sight, she can not be given mental images through supernatural or magical means, nor given temporary sight. This blindness can not be cured or relieved. Sometimes, in the darkness she sees, Delaney could swear something was staring back at her.

Biography:
Delaney was the youngest of eight children in a small farming town. Her parents worked full-time in the closest city to support their family, and the eldest kids were expected to care for the youngest. It was tough being the youngest and Delaney was desperate to stand out and be noticed. She found a friend in Micheal Thiboon who introduced her to goth culture. It was the coolest thing ever to the young tween. The two became inseparable.

Time passed, and the disappearances started. Micheal suggested it was a demon terrorizing the town. The two made plans to go into the woods and hunt down the demon and kill it with magic from a black book Micheal bought online. Deep down Delaney knew that demons and stuff didn't exist, but figured the woods would be safe enough because who else would be out in the middle of the woods? Which might have been the case in another, more normal, reality.

Into the woods they went, joking and laughing. It found them. Delaney can't recall what happened next perfectly, but she knew enough. Micheal threw himself in Its way, and shoved her back. That she knew. Then. . . insanity? Madness? Colors and shapes radiated from It that hurt her mind to comprehend. She saw a twisted world shaping itself around It as it began to tear into her friend. She ran. Delaney hit every tree and bush in her rush out, afterimages of that place and thing covered her sight. Even behind her closed eyelids she saw those shapes and colors.

Delaney was found wondering down the side of the highway crying. In the official police report, it states that she and her friend were attacked. Micheal's death was ruled a homicide. Delaney told them it was a monster that attacked but the adults didn't believe her. They said she was traumatized after watching the death of her friend. She tried to explain the images she still saw but they only took her to the hospital. The doctors told her that some kind of thin film had formed over her eyes, cutting her effective sight in half. They were baffled.

She was supposed to stay at the hospital longer, but her parents pulled her out and told the doctors they'll come back should anything change. Delaney was glad she didn't talk about the shapes and colors, else they would have kept her for sure. Her parents said they'll do what they could, should she need glasses or vision correction. Delaney didn't expect them to follow through as money was very tight in their family. She couldn't forget what happened in the woods. When the disappearances turned into killings over the next few months, she knew what was the real source of the deaths.

As it turned out, Delaney was not the only one to know of that Thing. Delaney found Rowan and the others, and bonded with them. She swore that she would stop at nothing to see that Thing dead. The rest was simple. Delaney and her new friends performed a ritual to kill it, but seeing the Elder God again was too much of a strain for her eyes, and she was blinded completely. Delaney woke up in the hospital in a panic. She couldn't see, and voices whispered nonstop in her head.

Like the others, Delaney was taken to the islets to recover. She learned to deal with the voices, her new abilities and her blindness. She was one of the last to leave the islets, but she wasn't alone. Somehow her parents found the funds to purchase a seeing-eye dog for her. Delaney found immense comfort in her dog during her remaining days on the islets. Now, she's ready for her new life on Manta Carlos.

Resources:
Georgette - Poodle Service Dog
Image sourced from The Dogist
Delaney lives in the dorms and receives the stipend from the school. Her family sometimes sends her craft supplies.

Additional Information:
Her friends may call her "Dela", but no one else may.
Delaney loves to embroider, and has not let being blind keep her from the hobby. She thinks she's come up with the perfect solution with the help of some string grids and a 3D pen.
She's very crafty in general, and before the ritual was a rather skilled sewer and paper crafter.

Image Credits
Art created by towa on this Picrew creator