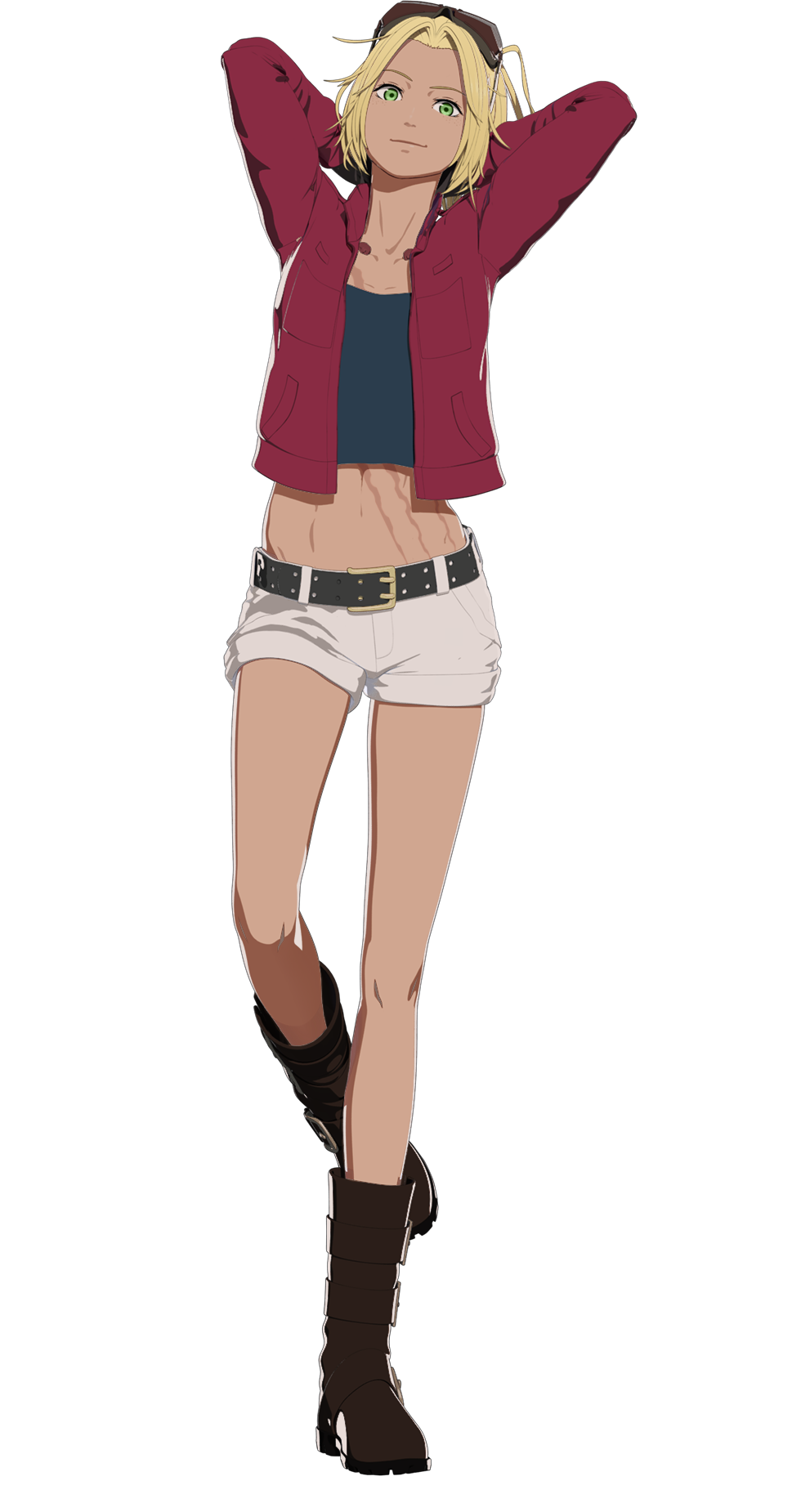 Dalia is somewhat tall and athletic for her age, standing at 5'2" tall with a lithe, acrobatic musculature. Her skin is tan from being outside and complimented by her bright green eyes and dark blonde hair, which she wears around shoulder length to style as she needs. Under her clothes, she has a number of scars that would alarm most normal people: Dalia's clothing preference tends to fall into the category of "cute but functional." She enjoys skirts and feminine clothing, but also wants to be able to move and run around properly. She is also sometimes seen in her cheer leading uniform.

Her arachne form is not too different from the hips up. From the waist down however, she is a massive spider with red, lavender, and black carapace and a bone white skull-like marking on her abdomen. Where her human legs were, she has pedipalps covered in armored carapace.

Dalia dresses for action most of the time, wearing clothes fitting to the weather that can take a beating without too much damage to them. She is particularly fond of weaving her silk into clothes and dying them herself. She is not against dressing femininely however, and particularly in her Arachne form she has a fondness for big ruffled skirts and intricate lace patterns.
personality
Dalia is loud, abrasive, and bombastic like her mother. But whereas Malara is rude because she genuinely sees herself as superior, Dalia's teasing is mostly joking. She is fiercely loyal to those she loves and will defend them until she is blue in the face, but isn't above telling them off when they are wrong.

She loves physical activity and craves physical affection, these two together leading her to enjoy roughhousing quite a bit. She has no qualms about making others uncomfortable and will typically say what is on her mind regardless of who is around.
abilities
Actives
Arcstrider
Dalia can electrify part or all of her body to enhance her strikes with the force of a taser. She can also move herself in quick bursts up to 20’ in any direction or magnetize herself to surfaces like walls or the ceiling. While she remains actively electrified, pools of water deeper than one inch and heavy rain cause her to short circuit and hurt her.

Railgun
Dalia can use the electricity produced by her Arcstrider ability to generate sudden bursts that let her propel objects that she is touching the same way that she propels herself. The speed that the object is moved at depends on how much power she puts into it. At minimal power, she can shoot a coin like a slingshot. At full power, which takes several seconds to charge up, she can fire that same coin with the force of a cannon. Using her full power however will send her flying and/or break her bones in the process.

Ama-gi, the Limitless
Dalia is bound to a weapon, the default form of which is a spear. She can change the weapon into any simple form she wishes, up to the size of a tower shield and as small as a coin. The weapon itself is indestructible, and is normally carried on her person as a bangle.

Two Sides, Same Coin
Dalia can transfer one of her two souls into her weapon, effectively making it holy or unholy. While holy, it can wound demons and other creatures harmed by holy artifacts as though they are human and while unholy it can wound gods and angels the same way. While one of her souls is in her weapon, Dalia can only benefit from the part of the Two Sides, Same Coin passive that she keeps in her own body (such as counting as a god when it would benefit her but not being able to count as a demon, etc.).

Velo Bangles
Dalia has a set of magic ankle straps that, when a command word is spoken, turn into a pair of roller blades. These skates allow her to move on and surface, rather than just smooth, solid ones like concrete. She can even move along the surface of water without sinking, so long as she doesn't stop moving. She cannot use these in her Arachne form.

Arachne Form
Dalia can assume her Arachne form at will and change back at will, though she cannot shift in direct sunlight. While in her Arachne form, Dalia's strength, speed, and jumping distance are all increased by 10x.

Arachne Silk
Dalia can create silk that is ten times as strong as steel of similar thickness and similarly immune to being burned. It can be adhesive or not. She can walk on webs that she makes from her silk as though she were weightless and does not stick to the adhesive silk.

Passives
Bondsight
When looking at any two people, Dalia can see what kind of relationship those two have to one another. She can also see how a given person feels about her by looking at them.

Two Sides, Same Coin
Dalia appears to have two distinct souls to those who can perceive such things. These souls are separate but both wholly hers and are not malignant or extraneous in any way, and neither can be removed without damaging her irreparably. Due to the opposing natures of these souls Dalia counts as either a Hellion Demon or a God, depending on which would benefit her the most or cause the least trouble for her. She counts as neither for the purposes of effects that cause harm to others (such as those who are allergic to gods or demons).

Daughter of Flame
Dalia, and by extension any clothes she wears and up to any one person she embraces, is immune to the negative effects of heat, smoke, and fire.

Glutton's Maw
Dalia can devour anything with no ill effects. She can chew through metal and drink bleach with no harm to herself.

biography
Dalia was one of four surviving children of the Arachne Demon, Pandora. Being the daughter of Malara as well, she was taken in and raised by the pair and Chloe Black along with her sisters. She gained a reputation as a bully until the tables got turned and she was given a taste of her own medicine. She assaulted her bully to make the torment stop and spent time in the detention facility for her crime.

She was involved in both the Blood Diamond event, where she protected her sister after the latter was shot. She also was affected during the March Virus, which turned her carapace red. At some point, she admitted feelings for her friend, Jax, and began dating him (as much as kids can date, at least).

Over time, Dalia's health gradually deteriorated but no one could tell her why. Eventually her uncle, Vatar, used his magic to reveal that her dual nature, divine and demonic, was pulling her apart at the seams.

After Pandora and her older sister Phaedra abandoned their family to go back to Hell, Dalia decided that she would remove her demonic half in order to save her life. Chloe made a deal with a demon to facilitate this and Dalia has slowly been developing her more deified abilities since.
resources
Mooches off of her rich mom.
additional info

Image Credits
Main image is official art of Natalia Garnet from Levius. Edits by me.
ICC icon was made using this Picrew by Baydews on Twitter