Gender: Genderless, used to be male, considers himself to be male. (he, him) 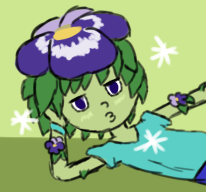 Standing at a whopping 4 feet and 2 inches, Carmin is easily mistaken for a child. His body is small, thin, and about as intimidating as a rabbit. His large eyes are dark purple in colour, and typically wear a defensive expression. His body is basically one large human shaped pansy plant, with a massive purple flower sitting at the very top of his head. Along with this large pansy are multiple small ones which bloom all over his body from the neck down, seemingly at random. His skin is green, with small leaves growing everywhere at random, similarly to the flowers. His face is almost always blushing, though people usually can’t tell because his cheeks go a lighter green rather than red. His hair is made up entirely of leaves, which reach down to his neck. He’s very light for his size, weighing in at about 45 pounds, though this can go down to 30 if he’s completely dehydrated. When out in public he tries to dress maturely, wearing pants, ties, collared shirts, and anything else he could deem mature. He can also be seen wearing a large backpack, usually filled with water bottles, his nifty fly swatter and books. When he’s not in public he tends to wear basic casual clothing like tee shirts and shorts. He usually needs a belt for all his legwear, apart from the school uniform which fits perfectly fine without. When he’s not healthy, his body shrinks, his skin loses its colour, the flowers wilt, and his leaves turn light brown.

Carmin is self conscious about his appearance. He can’t stand looking like a child and being covered in flowers and he feels that the world can’t stand him either. Everywhere he goes, he feels like eyes are on him and he’s being judged. This results in him living in almost constant humiliation, feeling embarrassed simply by being near other people. He also has a terrible case of jealousy. He feels it’s unfair that other people may look normal or have cool otherworldly abilities. He tends to dislike people without giving them a chance, judging them in the very way that he’s afraid they’re doing to him. Of course, he never voices any of these issues, he’s more of a bottle it up type of person. He’s also stubborn and has a hard time admitting when he’s wrong. He sees the world under a negative light and tends to point out the bad in everything around him, often overlooking the good. As one could imagine, this terrible outlook on life leaves him living a lonely life. Unfortunately, he’s become acclimated to being alone and as a result he puts zero effort into making friends, claiming he doesn’t need them. The truth is he’s just afraid of the all too likely rejection he thinks he’d face. He’s not particularly brave, leaning more on the cowardly side.

When it comes to rules, Carmin is surprisingly good at listening. He’s especially against the breaking of any laws. He also tries hard at school. Hoping to put extra effort in so that he can eventually catch up with his age group. Deep down, Carmin isn’t a completely terrible person. He’s quite the softie, and a childish goof on the inside. He spent a good chunk of his recent years with a lady whose interactions did a number on his personality, but if the right moment arises, these parts of him still poke through.

Carmin was born as the second child to a totally normal family. He had two loving parents and an older sister. He grew up in a small but quiet neighbourhood, made some friends, and had a good relationship with his family. He was a bit of a jokester but kept his behaviour in check for the most part. He also became pretty sensitive, which had its own pros and cons. He was good at hiding the fact that he was a softie most of the time, but every now and then he’d get caught crying at a sad movie in class and experience some teasing. Nothing too bad, he certainly wasn’t bullied as a kid.

In 7th grade, he developed a crush on a girl in his class but didn’t have the guts to tell her at first. After half the year had passed, he finally worked up the courage to ask her. Unfortunately, he disappeared on the morning of the day he planned to ask her. He wanted to buy her a gift but forgot his money, so he made the difficult decision to steal a pot of pansies from the front of a flower shop that hadn’t opened yet. He took them casually as he walked by, but only got another 20 feet before passing out.

When he woke up, he was a plant. The flower shop owner was some sort of witch, and she’d put a heavy duty curse on him as punishment for stealing. The curse had obvious effects, like making him a big flower. As well as ones that couldn’t be seen, like preventing him from hiding or changing his form in any way.

The witch had him work for her, in a secret section of the shop full of illegal witchy plant life. He was told it would only be until the end of his curse time but was never told the exact amount of time. He tended to the plant’s unusual needs, as well as his own. Slowly learning how to be coordinated without a sense of touch and how to care for himself. The witch provided his needs but was far from an ideal boss. She made him answer to the name Pansy, put a solid effort into ridiculing him, and told him she was adding years to his curse every time he made a mistake.

For 6 years he worked for that horrible lady, receiving 42 additional years to his curse. 5 of which were on the first day. For all he knew, his curse could’ve initially lasted a day and he never would’ve known. On year 6, the lady made a mistake and left her phone in the secret room with him. Having given up on ever reaching the end of the curse period, Carmin took the phone and called 911. He told them the full truth; aware they wouldn’t believe him. He knew they’d send someone anyway, they had to. Unfortunately, the witch caught him in the act. She looked furious at first, but quickly calmed and started chuckling. She wished him a good life as a plant, then vanished.

Scouts arrived at the shop shortly after and discovered the hidden room in seconds. Carmin was then taken to a remote location for several days after. They were aware magic existed and weren’t particularly shocked by the situation. The only shocking part was how stubborn the curse was. They spent the following days bringing in different specialists and trying all sorts of charms and even potions but couldn’t do anything to undo the curse or even to hide it.

When Carmin asked about his family, the question was always dodged. He never found out what had happened to his family. He was told he couldn’t go home and that there was no way he could live a normal life where he was. They convinced him to go to Manta Carlos, though it didn’t seem like he had much choice. Before he knew it, he was taken to the island and enrolled in Starlight Academy to resume his education. He studied his heart out and managed to do well enough on the assessment test to land himself in grade 10. 2 years below where he should be, but still impressive for having missed 6 years of school. He also obtained an MSD ID card and bracelet in his time on the island.

Carmin works for Fe as a songwriter and lives in the school dorms.


Additional Information:
-Carmin can’t stand insects to the point that he carries a fly swatter around with him in his backpack. The exceptions to this are the bugs that eat other bugs.

-Carmin is easily upset by the word pansy and might actually show that anger if anyone were to use the word as his name.

-He knows a lot about plant life but isn’t particularly interested in plants and isn’t fond of flowers.

-The flower on Carmin's head gets larger in the Spring time, then returns to normal in the Summer.

-Carmin can't eat solid foods. Anything that isn't water will usually end up causing him to choke for a bit before sending it back out his mouth in the same state it went down.


All artwork featured in this application is by yours truly​

Image Credits
All art here is by me.