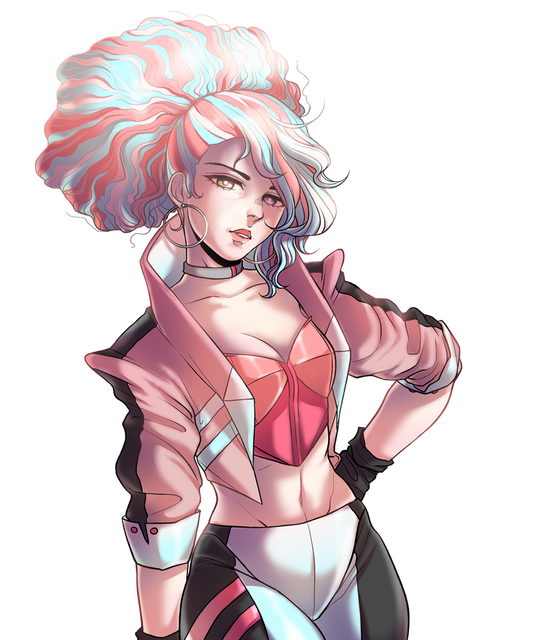 BUBBLEGUM BEE | 18 | JUNE 21 (SUMMER SOLSTICE) | FEMALE | HALF-DEMON/HALF-MUSE | CITIZEN | POP-STAR
appearance
Eccentric, flamboyant, and futuristic are all words people have used to describe Bee's general look. Tight fitting bodices, reflective bright colors, and stylish jackets are commonplace. Being able to change her hair at will makes it difficult to pin down one style and color, but she does tend to keep it to her namesake and in the bubble gum or cotton candy color palate. The only constant is she is almost always seen with it pulled back in a fluffy ponytail, with bangs hanging out styled to near perfection. Bee has complete heterochromia eyes with one being a light green and the other being pastel purple or lilac.
personality
Bee is completely an entitled teen. She's had it good and she knows it. She can't relate to real struggles and tends to either change the subject or not join the conversation if it gets heavy like that. Attitude very much matches her dress: flashy, stands out, and rather in your face. Is the girl in school that everyone wants to be/date or that everyone hates ("It's because they're jealous duh.") Gets extremely annoyed at the scouts even when they are just mentioned.
active abilities
"Glow": Bee can change the pattern, style, and color of any clothing she is wearing with a snap and a mutter of the word "Glow." This covers hats, glasses, tops, bottoms, jewelry, socks, and shoes. This changes only while she wears it and it returns when removed from her body. The item would look and feel real to herself and others.

"How's my Hair?": With a shake of her head, Bee can change the color of her hair to whatever she chooses. This change is permanent until she decides to change it again.

"Who me? I'm just Bee!": Bee's singing voice is naturally alluring. It has been compared to a weak siren's song. Easily influenced people, or those easily influenced by her, are completely taken by it and fall for her. Most simply find it beautiful and enjoyable even if it's not a style they typically enjoy. The length of time this affects people depends on how strongly they were affected. Those falling for her find the feeling persisting for potentially several days, while those enjoying her voice have it subsided when she's done.

"A kiss will never miss": Blowing a kiss to someone will cause them to fall in love with her for 30 minutes. This attraction is appropriate for their sexual orientation, with those not having her in their preference getting the urge and desire to know and be incredibly close with her. After 30 minutes, they don't realize it was an ability, it just feels like Bee is incredibly charismatic and attractive, even though they have control over their feelings for her again.
passive abilities
"I'm gonna live forever": Bee is completely immortal and will stop physically aging sometime in her 20s as her mother and father both did. While her current physical body can be killed, she will be resurrected in the hell her father is from in a week and must stay there for another week to strengthen herself back to normal.
weaknesses
"Can you put that away?": Being around or touching holy items doesn't harm her as it does her father, thanks to her mother. They do, however, make her incredibly anxious. To the point she either has to leave, or it is all she can focus on until it is gone. Physical cues are fidgeting with her hands and unable to look away from the object.

"Names have power": Upon speaking her full true name, Bridget Virthrodon Kelsha, will summon her to the speaker's side. This is extremely disorienting and taxing. Care should be taken as Virthrodon is her father's true name, and speaking it without her first or last name will summon him instead.
biography
Bridget is the result of a Muse and a Demon falling for each other without knowing what the other was. Bee's father, Victor, was a demon of seduction and had fallen for Bee's mother, Kelsha. He decided to use his powers to make her his own, but little did he know, she had been doing the same to him the entire time. They finally married and gave birth to one Bridget Virthrodon Kelsha. Her name came from combining her father and mother's names together.

Bee had a good life. An easy life. Everything she wanted was given to her. With who her parents were, it was easy for them to provide for Bee. When it was evident what powers she was going to have develop, they both began to set her up for success. Singing lessons, music classes, dance, performing arts, and anything else they could think of. Of course Bee excelled in all of these, and soon began outdoing even her teachers.

At the age of 16, Bee's parents believed they had the break she would need. To get famous took more than talent, it had to be right time and right place. Bee recorded a single and it took off slowly at first, eventually gaining traction online and even leading to a single tour.

That attention was what drove the scouts to seeking out her family. Upon hearing the situation and the potential ramifications of different scenarios, Victor moved his entire family to Manta Carlos, seemingly ignoring all of his daughter's protests. Begrudgingly, Bee has debated trying to reignite her career on what she sees as a dump of an island.
resources
Has personal income still coming in from rights to her music. Lives with her family in a large house.

additional info
Was homeschooled through most of her life until she graduated early. Her music is heavily Pop, but has EDM undertones and writing.