Appearance Description: Azure sports short black hair. His eyes are an intense glowing blue that seems to intensify or fade in accordance to the phases of the moon. He also sports a bushy wolf tail. He stands at 5’9” with an athletic build. 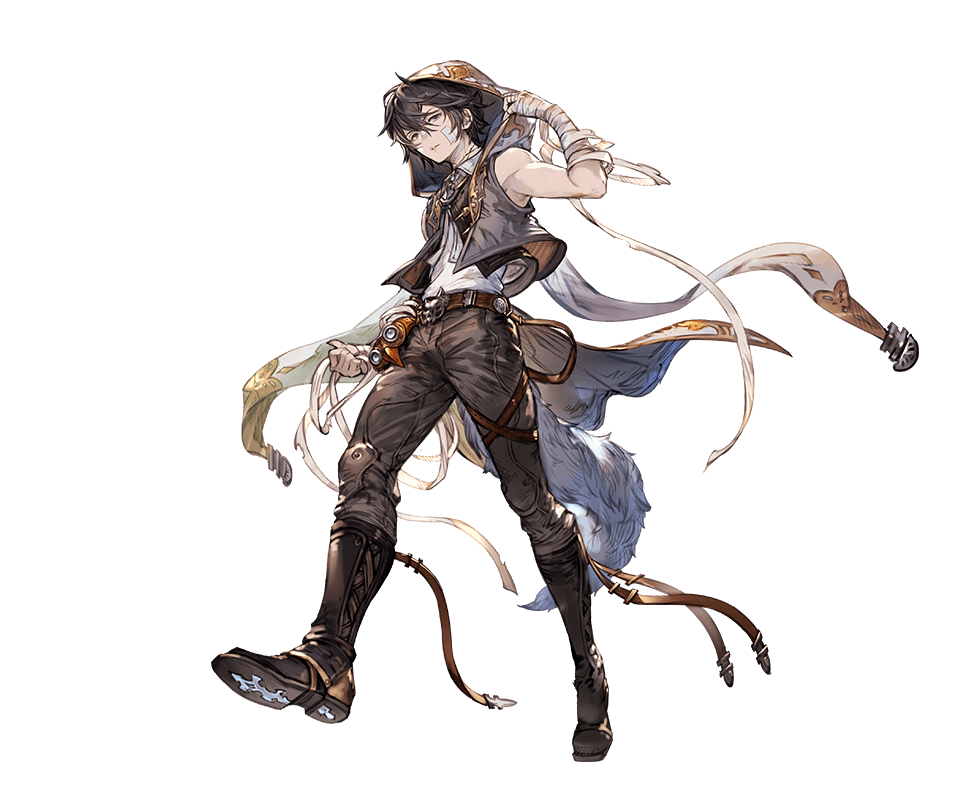 His wolf form is either five average sized wolves or one large 15 foot tall wolf. He has a mane, and blue fur that seems to have stars and celestial bodies in it that become more pronounced as it gets closer to the full moon.

Personality Description: Azure’s fairly reserved and quiet most of the time. He’s curious, but wary when it comes to being in society. As a result of his past there are things in society that he doesn’t fully understand, or sees it as pointless. He’d much rather be off running around in the woods, enjoying nature. There is a certain tenacity that he seems to display when he performs any given task. Of course he does have his predatory instincts and strong sense of loyalty as a wolf would.

The Pack: Azure’s shifting works a good bit differently than other werewolves. Instead of shifting into a single wolf, or a monstrous hybrid, Azure can become a pack of gray wolves. These wolves are identical in appearance. They can spread out within a 100 foot radius and psychically linked. Should the link be disrupted four of the five wolves will vanish, and the final one will revert back to his human form. Killing each wolf individually will also have a similar effect. When this does happen, Azure is left with a splitting headache and nausea.
The wolves can also merge into a single giant wolf when it’s convenient for them. This wolf stands at fifteen feet, and is proportionally strong and durable for its size.

Wind Manipulation: Azure can create air currents around himself to increase his double his movement speed, and mobility. He can launch himself up to fifty feet into the air using one of these currents, and similarly prevent any sort of fall damage by using the wind to slow and cushion his fall as he comes down. He can use similar air currents to knock people off of their feet. Azure needs at least ten seconds to build up the necessary wind and thirty seconds of cool down before it can be used again. This ability, like his others is effected by the lunar cycle and doubles on nights of the full moon.

Physique: Azure’s base physical abilities put him at peak human strength in his human form. He can run up to 60 mph in any form. His reflexes are sharp enough that he can dodge a bullet. Azure also possesses the senses of a wolf in all of his forms. His claws and fangs in his wolf forms are capable of tearing through steel with ease.

Healing: Injuries such as cuts and bruises can take anywhere from a few seconds to several minutes to fully heal. Broken limbs must be set, but they usually take about a week to heal.

Blessing of the Moon: Azure doesn’t actually go feral and shift on nights of the full moon. Instead, his physical abilities are double what they would normally be. On nights of the new moon, Azure receives no increases to his strength. During the phases leading up to the full moon, his strength gradually increases, with the First Quarter granting him a boost of fifty percent. His power decreases after the full moons, in the same manner until the new moon, where he gets no boost. He also receives no boosts during the day. The strength of his power is indicated by the glow in his eyes.

Pack Presence: In his human form, anyone within 50 feet of him will get the feeling of eyes on them. Periodically wolf sounds can be heard from somewhere The noises tend to correspond to his moods. When he’s calm or content there’s little to no noise at all. When excited there may be playful barking. Anger will invoke growling and snarls.

Weaknesses: Silver leaves him with severe burns and wounds caused by it heal a rate inverse to his healing, unless helped along with healing magic.

Exposure to Wolfsbane negates all of his abilities. Depending on the application depends on how long the effects last. Typically a half hour at the minimum. If exposed to the skin it physically weakens him, and has effects similar to poison ivy. Ingesting it causes extreme nausea and vomiting. Introducing it into the bloodstream causes extreme pain and can be potentially fatal if it lingers long enough and isn’t filtered out.

Biography: Azure’s life on Manta Carlos starts at the point where he was murdered. He was a werewolf in his world, but mostly as a fairly solitary wolf. He was hunted and killed, but effectively reincarnated “someplace he could thrive”. When he woke up, he was in the woods on Manta Carlos. After warily wandering for a while, he was eventually found and picked up by authorities and set up with the academy. He’s been living on the island for about a year, during which time he took cultural and remedial classes. He's been taken in by Celeste Forestier.

Resources: Lives with Celeste Forestier and receives an allowance for necessities.