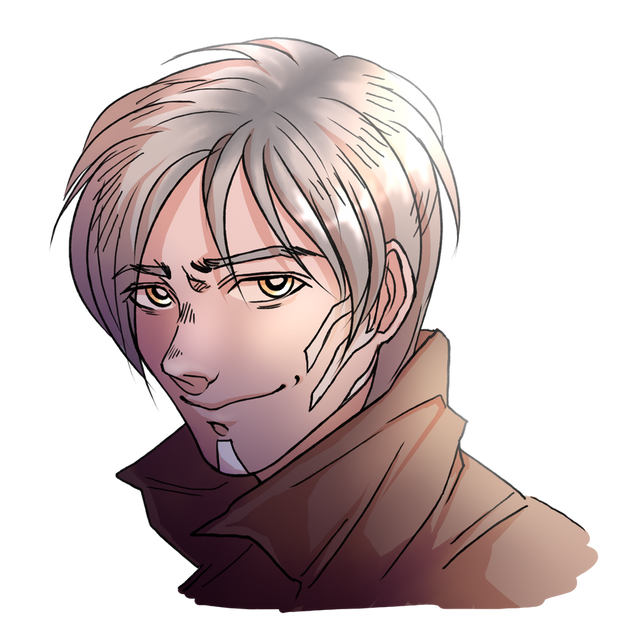 Dassa are naturally a bipedal species very similar to humans. Major differences are the stripes on their skin that are unique to a family (specifically father) line. They also have four arms instead of two. Most Dassa, however pick a form in their formative years and remain in that as their main form. Alyx has picked a human, shedding the extra arms and adjusting his size to look like a 6'1", 180 pound human male. The stripes on his skin have stayed. His yellow eyes almost match except for traces of cybernetic enhancements in his right eye. Has a tattoo on the inside of his left wrist known only to inner circles marking him as part of an ASTRAL team

Alyx watched too many older earth movies of pilots. Space pilots, fighter pilots, if they flew something, he watched it. His love of these movies has caused his personality to match that of a hot shot Ace. Arrogant, outgoing, confident, and the always present desire to have a good time. He's extremely easy to get along with as long as you can stand him talking about himself a bit.

Alyx Assath was not always known by this name. He used to be Der'Crina Assath. Growing up with his parents trying to teach him about the galaxy, they showed him Earth movies. He quickly fell in love with fighter pilot movies. Top Gun, The last Starfighter, Independence Day, and others depicting hot shot pilots saving the day soon began to mold who he was. He vowed to one day be just like them. He even started taking on the form of a human and took on the name Alyx, a play on Alex Rogan from The Last Starfighter.

Every chance he got to fly, he took. From inner atmosphere aircraft, to spacecraft. He studied different models day and night, learning their strengths and weakness. Eventually Alyx got linked up as a part runner for an ASTRAL (Advanced Star ship Racing League) team due to his love of ships.

One day, the main pilot was injured before a race. The only person that could fly was Alyx. He was excited at the chance and, counter to the team's recommendation to just make it through in one piece, he actually scraped together a 3rd place win.

Soon he was racing for the team regularly. Unfortunately, due to the nature of the league, his team was poached apart by other teams able to pay more. Down to the last bit he had, he met up with an engineer in a similar situation, Kek. Together they built up a custom ship to race. Alyx doing the flying and Kek keeping it running and making improvements.

After sinking their last bit of money from a recent win into the ship, a rival sabotaged the ship board AI. Desperate to not forfeit the next race, they hit a scrapyard and salvaged an AI from an older yacht. Little did they know that the AI, Cambrissa as they would learn, would retain most of it's 'party' coding. Not having much choice, they installed the new AI in the ship and did what they could.

To everyone's surprise, they did and continued to do extremely well with the unconventional ship AI. Deciding to keep it, the now trio took a vacation after a significant win to the Starlight Observation Station. While there, they noticed it was a convenient location to get parts, make repairs, and learn about races. Having a nice hub at the Station, the trio decided to make it a base of operations for their team.

Shared Custom built ship used for ASTRAL racing. Stays in a small studio apartment on the Starlight Observation Station. Lives off his share of winnings from the races and the hired driving/flying jobs he does.