All things considered, there isn’t much about Alby that makes him stick out. His hair is brown, going down just past his ears in the front with a few random curls that give it a mind of its own. He has two hazel eyes, a nose and a mouth with no real distinguishable features apart from how expressive they all seem to get when he does just about anything. He stands at 5 feet and 7 inches tall, with an average build that doesn’t make him stand out as either weak or strong. When he isn’t wearing his school uniform, he tends to wear long sleeved shirts and jeans, but may substitute for shorts and a tee shirt when it’s hot enough or when he’s out for a jog. He typically carries a backpack around with him, filled with a weird assortment of items that make him prepared for nearly anything. He also has a mostly white journal that is always on his person. Since coming to Starlight Academy, he has picked up on one unique feature, he has glossy scars all along his right side. Though these are barely visible so long as he has a shirt on. 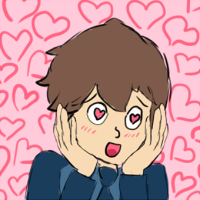 ​
At his core, Alby is a fanboy. He can’t get enough of the supernatural and will squeal with excitement over the abilities and unique features of basically anyone abnormal. He tries to fill his head with as much knowledge about the unusual as possible, typically recording his findings in the journal that he carries around with him. That journal is his prized possession, and should anyone steal it, he’d do nearly anything to get it back. His curiosity often leads him to ask a lot of questions, sometimes even asking personal ones and overstepping boundaries with people. He also tends to throw compliments at people without the least bit of shame. If someone has gorgeous flowing hair, he tells them, for better or for worse. The same can be said about negatives. If someone has a piece of broccoli stuck in their teeth, or if someone is behaving like a child, he’ll tell them.

He can be manipulative when he wants to be, though he’s usually pretty harmless about it. He wants the best for people and will do what he can to help others succeed. He also puts a lot of effort into improving himself. Be it by jogging or by training his ability. Even though his ability hasn’t really seen improvement in years, he stays positive and still thinks he’ll become an all-powerful psychic one day. This, combined with the way he seems to think his ability is incredibly remarkable, can make him appear delusional.

He’s a stubborn and persistent individual, so when he wants something, he’ll often go to large lengths to achieve it. When it comes to seeing something that interests him, he'll often act incredibly reckless. Not much can stand between him and his goals without resorting to brute force, though reason can often get through to him under the right circumstances. He’s also a pretty animated dude. His quirky body language and facial expressions usually make it easy to tell what he’s feeling, not that he’d ever lie about that anyway. Additionally, he's a pretty trusting guy and will act rather gullible unless given a reason not to.

In a bar just under 17 years ago, out in the narrow reality, a drinking competition was held. There was supposed to be one winner, but on account of the bar running dry, there were two. One man and one woman, both in their late twenties, both totally normal aside from having ridiculously strong livers. The two of them were very drunk that night, but despite not remembering much, they know they had a good time.

9 months later, Alby was born. To say that it wasn’t a mistake would be wrong, but to say that they regretted it would be equally wrong. Both were in stable jobs and they came to love each other once they got to know one another. So, Alby was kept and raised normally by the two and they turned out to be very loving parents.

Upon turning four, Alby suddenly gained the ability to drag small objects across the floor and towards him when he couldn’t otherwise reach them. After seeking answers or any sort of explanation, their family met up with scouts who explained that there was a place he could go should his powers get out of hand, but as it was, they could just cover it up. They were given a pamphlet and a number to call in the event of an emergency, and that was the end of that.

Alby developed his psychic abilities little by little until he reached the age of seven. It was at that point that he stopped seeing any improvement and hasn’t since. He kept a spoon in his room and tried to bend it night after night, but he never did succeed. When out in public, he simply didn’t use the power. His parents told him there could be grave consequences if he did, so he listened, and nobody ever knew.

While growing up, Alby also gained a fascination with the supernatural. His parents were well aware of what was out there but never told him, Alby was going off of assumptions alone. He basically figured that if psychics weren’t supposed to exist, but he did, then it must’ve been very possible for other things to exist too. Though he never did manage to find anything else.

One day, while cleaning out a cabinet, Alby stumbled upon the old pamphlet. He learned a thing or two about the island, then confronted his parents and got the rest of the truth from them. After that, Alby begged to go to the island. He was initially met with a no, but eventually managed to persuade them about two years later.

The number was called, and before he knew it, Alby was sent to the island. He was given classes to attend for the following two weeks to get a feel for the academy before the summer came. As well as a room to live in.

Alby receives money from his parents as he needs it.

-Alby isn’t even aware, but he has a tremendously high alcohol tolerance.

All artwork featured in this application is by yours truly​

Image Credits
All artwork here is by me.