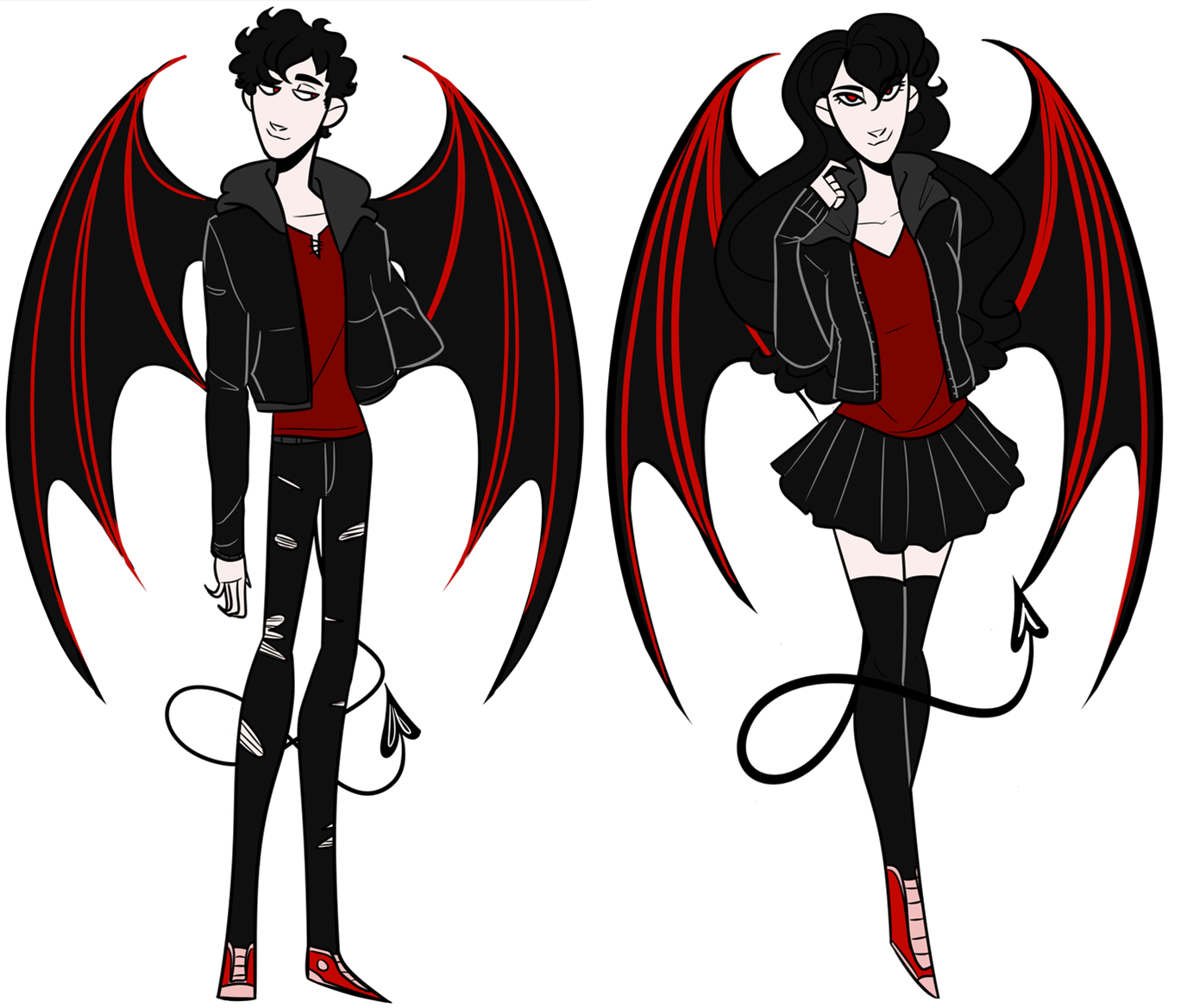 Aaron usually comes off as a cheerful person, they're social and enjoys being around people, parties and large social events are common for them. They have a mischievous side to them, a playfulness that can be quite enjoyable or troublesome depending on your point of view, in general they try to be a friend to everyone, they like to have a good open air about them. In truth their quite troubled, their demonic side emerging caused a number of problems for them especially when the public became aware of it, bullying and general anti demon racism has left them with an on and off case of depression and some anxiety. They've done their best to keep going, though it has been difficult for them to come to terms with some things.

•Active:
•Pleasure Manipulation: They're able to cause people to feel great pleasure, as they're causing the pleasure via magic it can reach much higher levels than through normal stimuli. They can lower and raise the intensity of the pleasure as needed and focus it either into the whole body or parts of it. They also get a pleasure boost if he uses it while having sex.
•Limits:
-Touch: They have to be physically touching the person. They cannot use this ability on just themself.
-Pleasure Like A Human: Only beings who feel pleasure like a human will be affected. For example, a robot with pleasure programing will be affected, but one lacking said program would not.
-Blood for Pleasure: Using pleasure manipulation does drain them to an extent, it'll require them to need more blood than usual. The exact increase depends on how often he uses it and the intensity of the pleasure they induces on their partners. Regular daily use would double the amount of blood they require.
•Wings: Has bat-like wings that allow them to fly, can make them vanish and appear as he pleases.
•Shifting: They're able to change their sex via a form of shapeshifting, it's completely instant. (Note: May have this power unlocked in threads for fun and plot reasons)
•Breeding: They're able to control whether or not they're currently fertile for breeding, they're automatically infertile and once they wish to become fertile it takes about twenty-four hours for their body to make the necessary changes. This works in both forms. And they're able to generally breed with any species as long as they have similar reproductive organs.
•Duplication: They're able to make copies of their body, these copies are all still controlled by thor mind, feel all the physical things their normal body feels. They're able to form up to three at a time, they last up to twenty four hours, and can only go about a mile away from the main body. When these copies are formed their enhanced strength is divided among them in a weaker form (if they form one they'll each have half the physical strength etc.) though they retain the other abilities in full. These copies having sex or drinking blood doesn't count towards feeding.
•Size Alteration: They're able to instantly change their size, anywhere from as small as two inches tall, up to ten feet tall. Their physical strength lowers as they shrink in proportion to their size.

•Passive:
•Physically Enhanced: Can lift two tons and jump twenty feet. Has retractable fangs and claws.
•Enhanced Senses: Has night vision, can track people and animals via scent, with them being able to hear a whisper from across a room if they focus.
•Healing Factor: Most flesh wounds heal in a few minutes. They're immune to diseases and poisons, to the point where they're body can't even act as a carrier as diseases always die upon coming in contact with their system. However they are unable to regrow limbs without the help of healing magic.
•Forever Awake: As long as they stay properly fed they will not need to sleep, they can sleep if they wish but it's more to allow their mind to rest and isn't truly necessary.
•Enhanced Attractiveness: They're supernaturally attractive, this does not affect anyone's minds or emotions, they just naturally look very appealing at all times.
•Tail: A black demonic tail, it has the same enhanced strength as the rest of his body.

•Weaknesses
•Silver: Burns their flesh, shuts their abilities off, wounds created with silver leaves scars and said injuries always heal at the rate of a human. Being steadily exposed to it will essentially drain their life, they'll grow steadily weaker and weaker, more and more sick, as the silver acts as a toxin to them, if the silver is not removed it will eventually kill them.
•Holy Items: The presence of religious items within ten feet drains their physical strength, it immediately brings them down to below average human level and an hour of exposure will leave them unable to move. Being splashed with holy water will temporarily shut their abilities off as well as burn their skin, said burns will heal at a slow rate even when abilities return.
•Permission to Enter: They need permission to enter two types of locations, private residence and holy ground. To enter a private residence they need permission from the person living there, this permission can be verbal or otherwise as long as the resident informs them they're allowed to enter. To enter holy group they need explicit verbal permission from the person in charge of it (like a priest, monk, etc.) in order to enter. They require permission each time they wish to enter, if they attempt to enter either locations without permission they will physically be unable to, it will be like if there was an invisible wall that they cannot break keeping them out.
•Sunlight: Being only half vampire sunlight does not harm them to the extent of a full one, it does drain their strength though, bringing it down to average human levels upon entering the sunlight, and their eyes are very sensitive to sunlight, with him being unable to go outside without covering his eyes with sunglasses or the shade of a hood, with their skin getting sunburns at twice the rate of the average human, they will also overheat twice as fast as the average human in sunlight.
•Blood and Lust: Currently they need to drink blood and have sex daily to survive. Sex once a day is needed to keep them healthy. If they don't feed properly their mind becomes "fuzzy," causing his entire choice making process to become compromised and impaired, heavily affecting how they make choices and makes them easily manipulated, this state can be agrivated via influences like mind altering abilities. They can eat normal food but it does nothing for them.

•Works a job as a bartender and prostitute (only serving female customer for the later) at a brothel, also has their family's wealth available to them if needed. Has an apartment, plus a room at the family mansion if needed.

•The child of a one night stand between the lord of lust and and vampire woman, they were quickly abandoned on the island and taken in by the school.
•They spent around ten years an orphaned student under guardianship of the school. Growing up without any sort of a family made them a bit of a troublemaker at times but they never got into any serious trouble.
•Shortly after the age of ten they were found by their extended family who were wealthy and powerful vampires of a noble line who adopted him. They quickly settled into his new home, growing to like it.
•Entering their teenage years they became a bit of a partier, gaining a slight reputationof being a party goer.
•At the age of sixteen their demonic side emerged, granting then their pleasure manipulation ability but also their new demonic needs. While they originally attempted to hide this the fact they were a demon was quickly leaked to the public, with them now dealing with the affects of being outed as a demon, with him being spotted visiting and leaving brothel leading people to suspect what kind he is.

•Images are commissions from klamblotblob.